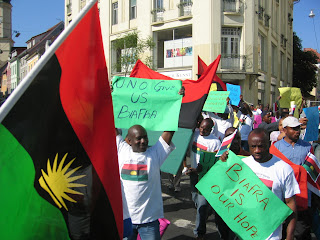 THE SHOCK OF TRUMP'S VICTORY AND THE JOY OF THE BIAFRANS

Far gone the days when terror abound in USA,the victory of Donald Trump which came as a shock and surprise to many people around the globe when they doubted the possibility has brought joy not only to the people of Biafra but to all those who embrace light and hated evil." In this regard,I would say that the prophetic voice of the IPOB leader Mazi Nnamdi Kanu and that of his followers were very much fulfilled as Donald Trump finally emerged the 45th US President.

Our joy can never be compare with anything because we believe that the same Chukwu Okike Abiama (God) whom by his grace not that of man favoured Donald Trump shall also be on our side on that very day of our referendum.

Before the election, I was with some Nigerians when they seriously argued with me and some even bate me that trump can never win the US presidential election while some boosted that the current US president "Barack Obama" had vowed not to leave office if trump wins,at this point i had nothing to tell them but quickly hinted out that whom God has Blessed no man can curse,I quickly left the scene why praying in mind that God by his infinite mercy shall see Mr Trump through,and it came to past on Tuesday 8 when God's own Candidate won the election.

When I heard the announcement on FOX NEWS," my heart was filled with joy and happiness as I quickly picked up my mobile phone and first called my Cordinator "Mr. Ralph Ikedigwe" and greeted him (All Hail Biafra) he responded but ask me hope there's no problem? I joyfully calm down my breath when I said to him that God has done it for us! He was a bit curious then I told him the goodnews that #Donaldtrump has won the USA presidential election, you can imagine his reaction as he joined me to praise the Lord of Host and ask that our Director Mazi #NnamdiKanu should be released.

I never bordered myself calling my Nigerian argumentative counterparts cause I knew by the declaration they have gone hiding and buried their heads in a smelling pit toilet of shame."

I have written 2 epistles (1)was an open letter to Donald J Trump with the title (I SUPPORT YOU) and (2) was also an open letter to the Americans with the title (MY SECOND EPISTLE TO TRUMP AND THE AMERICANS). In both letters I gave reasons why Trump must be supported and I also called upon my Biafran brother/sisters to join me in this very campaign cause trump was destined to rebuild the broken walls between Russians,Israelis,Biafrans and many other countries of goodwill surrounding the globe.

When Biafrans were busy praying and fasting to Chukwu Okike Abiama (God), the zoo government found pleasure in using our resource generated revenue to support Clinton while Nigerians are languishing in abject poverty. The hopelessness of General Muhammadu Buhari is one big reason the contraption called Nigeria is dancing (Dem Go Dey Poss)" a tune of music meant for those who claim to have everything but have achieved nothing.

Biafrans must surely remain resolute and loyal to the leadership of Mazi Nnamdi Kanu be it dead or alive as person like me in this struggle shall never allow or tolerate impunity or distraction of any kind to discredit the efforts and sacrifice of our lovely leader Nnamdi Kanu."

And for those of us who are hardcore,to them I say long live Biafra.