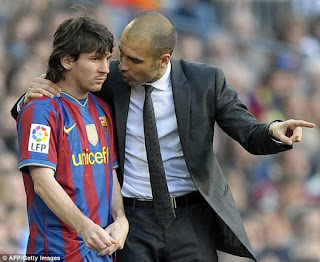 Man City footballer Samir Nasri, currently on loan at Sevilla, has revealed how Man City coach, Pep Guardiola, who was once a Barcelona coach,  banned Barcelona player Lionel Messi from having sexual relations after midnight. He also revealed that Guardiola also banned the Man City team from doing the same thing so that the players can be stronger at morning and recover from muscular injuries.
Nasri was one of a number of players who failed to convince the Spaniard of his fitness and worth to the team, he later joined Sevilla on a season-long loan deal in the final days of the transfer window. 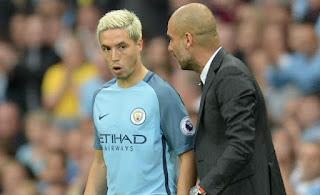 He has now revealed his first impression of Guardiola and how their relationship was before he left on loan.

“I’ll be honest, I fell in love with (Jorge) Sampaoli (Sevilla coach)” Nasri admitted to L'Equipe magazine. He’s a mix between Bielsa and Guardiola, with whom I was with in preseason and he made me realise some things. Guardiola told me that I was a mess, he told me several times and even kicked me in the butt, literally.

“When I returned from holiday having had a year with injury problems and personal life problems, I was a little out of shape. Not as much as what was said but a few, four kilos overweight; For Guardiola, over 2.5 kilos and you do not you train with the group.”

“Guardiola told me with your qualities you should not be at Manchester City, you should be at Barcelona. We had some discussions, he wanted me to stay and play for him. I told him no, because he couldn’t assure me a first team place, I wanted to play. He told me he thought I was making a mistake, but I still have a 2 year contract.

“For him, his players sexual activity must take place before midnight in order to get a good night sleep – even if they are free tomorrow. He (Guardiola) said that he placed this rule on Messi and his muscles improved since.”

'He told us this is how he managed to get the best out of [Robert] Lewandowski too and for them to avoid the maximum number of muscular injuries. He suppressed many things that were in the kitchen.'

'With Guardiola, on the first day of training, you know how you should play, how to squeeze and also how to stand off the ball,' he said. 'The next day, you have videos for everything that you have to do. He will not bully you, but he will do everything to make you progress, to get you to know you how to position yourself and how to play. He's a picky person.'