Boy Set On Fire Over A Mobile Phone

For allegedly abandoning a barber’s shop where a mobile phone plugged to charge was stolen, a boy was yesterday set ablaze in Enugu.The Guardian gathered that Wisdom Kelechi at about 11:00p.m. on Monday night had allegedly poured petrol on his friend, Junior Onah and set fire on him.

Onah’s sin according to sources was abandoning his friend’s mobile phone left in his custody in a barber’s shop where it was plugged to charge at Ifoh field in Abakpa Nike, Enugu.

Kelechi had returned to the shop and could not find the phone. Livid at the loss of the phone, he went out and returned with a gallon of fuel, which he poured on his friend and set him on fire.

Although, Onah was said to have been rescued by people, he, however, sustained severe burns that led to his being rushed to the hospital where doctors are battling to save his life.

The police in Enugu, which confirmed the incident, said Kelechi has been arrested. The Police Public Relations Officer (PPRO), Ebere Amaraizu, who expressed displeasure with the development, said a full-scale investigation has been launched into the matter with a view to unraveling the truth.

“The suspect has been promptly arrested by police operatives and he is helping in the investigations just as the victim was rescued with severe burns and taken to the hospital, where he is receiving treatment,” Amaraizu explained.

Meanwhile, an alleged attempt by a teenager, Enoch Ede to reconnect his residence with light said to have been severed earlier in the day by officials of Enugu Electricity Distribution Company (EEDC) over non-payment of bills, has claimed his life.

The police stated yesterday that Ede, who resides along Deeper Life road, Agbani in Nkanu West Local Council, was on Monday night electrocuted while attempting to reconnect his house, stressing that his mangled body had been deposited at the Agbani General Hospital mortuary.The statement warned the public to desist from illegal tampering and reconnection of electricity to avoid ugly incidents that might follow such action. 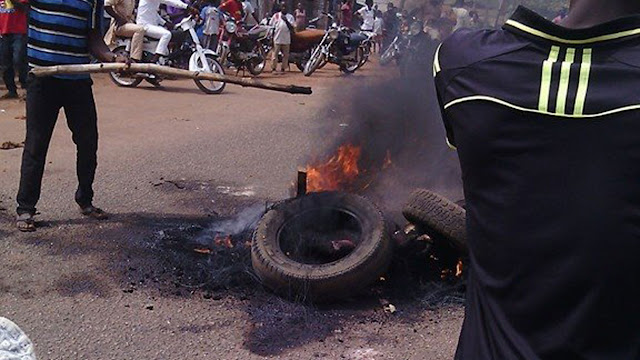