The Nigeria Police Force said it has arrested 31 suspects for alleged kidnapping, armed robbery, and illegal possession of prohibited firearms in Dikko area of Niger State.

The Force spokesman, Jimoh Moshood, disclosed this while addressing journalists in Dikko on Tuesday.

According to a Channels Television report, the arrest followed the reinforcement of Operation Absolute Sanity on the Abuja-Minna Highway with more police personnel by the Inspector-General of Police, Ibrahim Idris.

Mr. Moshood said the team was deployed to tackle the gangs of kidnappers who escaped arrest on the Abuja–Kaduna Highway and relocated to some roads in Niger State.

According to a statement, five suspected kidnappers died in a gun battle with the police, while one sergeant identified as Shettima Abdulahi was killed when the security operatives were ambushed by the suspects.

“The above-mentioned suspects were arrested in their hideouts and camps where some of their victims were rescued and the listed firearms, ammunition, army camouflage uniforms and operational vehicles of the kidnappers were recovered from them,” he said.

“In the operation that is still ongoing, four different vicious and notorious kidnap for ransom gangs, including those dealing in illegal possession of prohibited firearms were dislodged and busted.” He added.

The police spokesperson also said a notorious gang allegedly responsible for the death of some security personnel who were recently killed along the Kaduna–Abuja and Abuja–Lokoja roads were arrested.

“A total number of 31 suspected kidnappers/armed robbers were arrested in the operation. They confessed to the offence and admitted to the various criminal roles they played in committing the crimes.

“Most of the suspects were identified by the victims as being responsible for their kidnap,” Mr. Moshood added.

He said efforts were ongoing to arrest other suspects at large, noting that all the suspects would be arraigned in court as soon as the police conclude its investigation.

He was hopeful that the renewed commitment of the police to reducing crimes across the country was yielding positive results.

The Nigeria Police had in July redeployed all police officers serving in different formations along the Abuja-Kaduna Highway due to reoccurring cases of kidnapping, armed robberies along the highway. 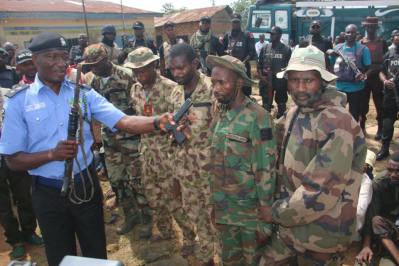