Lai Mohammed who is the minister of information has said that President Muhammadu Buhari’s health issue is a private affair in spite of the fact that the country is paying his medical bills.

President Buhari was out of the country for more than three months for medical treatment in London and the minister of information said it was not strange that the country was paying his medical bills.

The Punch reports that Mohammed in an interview with AFP also spoke about Nnamdi Kanu’s Biafra agitation saying he had gone into hiding.

“I think there’s so much speculation as to what he’s been treated for.

“I think we would rather respect his privacy. If Mr President feels like telling the world his ailment, so be it. I don’t think he’s under an obligation to tell anyone.”

The minister also responded to question about President Buhari’s plans for 2019 saying he was more focused on delivering on his promises.

He said: “If he’s going to run that’s left to him but right now, his major preoccupation is delivering on all his electoral promises.”

On the claim that the government had abducted the leader of the Indigenous People Of Biafra, Mohammed described it as false.

He said IPOB had “crossed a line” from legal protest and that he suspected the separatist leader was “in hiding”.

“He’s not being held by government at all.”

Meanwhile, the Biafra Zionists Federation ( BZF) said Lieutenant General Tukur Buratai, the chief of army staff and Lai Mohammed, the minister of information, will end up in prison over the recent deployment of troops to Abia state.

Reports have it Benjamin Igwe Onwuka, the leader of BZF, on Tuesday, September 26, said Lai Mohammed will face International Criminal Court (ICC) over the recent killings in the state. 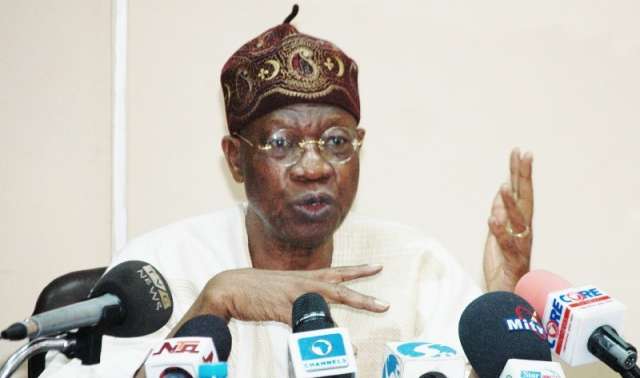