Like paintings and sculptures, buildings can be beautiful works of art.

We asked architects to tell us the one building that's a design game-changer, that inspired them to become architects, or that they find stunning.

Here are 22 of the most breathtaking buildings in the world, according to people who build them for a living.

The Parthenon in Athens, Greece

"It's the quintessential beautiful architectural form," Tara Imani said. "The Doric order, the use of entasis [a slight curve in columns] to make sure the columns didn't look spindly from a distance ... the siting on a hilltop — it gave us our initial ABCs of architecture that we keep trying to use and improve upon today."

Imani is the founding architect of Tara Imani Designs.

The National Congress of Brazil in Brasilia

"In 1974, my father, a scientist, took our family to see the new city of Brasilia. It captured the imagination of the world," Julia Donoho said. "Planned in the shape of an airplane, Corbusian [the modern architectural style of Le Corbusier] housing blocks lined the wings like feathers. The body was filled with embassies, government buildings, cultural institutions, and a house of God."

Donoho is the principal and project lead at Equinox Design and Development.

The Sao Paulo Museum of Art in Sao Paulo, Brazil

"It is daring," Damaris Hollingsworth said. "Designed in 1968, it is made of concrete and glass. The main body is hung from the two beams, and it barely touches the columns on the side. I also love the fact that it was designed by a woman."

Hollingsworth is the project manager for DLR Group.

"It has amazing scale and longevity of the design, complex structure, yet simple forms," Rosa Sheng said. "My grandfather ... explained that architecture is meant to last beyond one's lifetime. It is a living time capsule of the culture for an entire civilization."

Sheng is a senior architect at the firm Bohlin Cywinski Jackson.

The Innovation, Science, and Technology building at Florida Polytechnic University in Lakeland

"When I worked for Santiago Calatrava, I was part of the team that procured the Florida Polytechnic University campus project," Marica McKeel said. " Not only to do I love the design of the Innovation, Science, and Technology building, but I feel a real connection to this project and to the Lakeland community, as my father grew up in Lakeland and I still frequently visit family there."

McKeel is the principal at Studio MM.

The Hubertus House in Amsterdam, Netherlands

"For an institution that took in and protected unmarried mothers on an equal basis, the building is equal parts playful and dignified," Randy Deutsch said. It is "a colorful contemporary project in steel, glass, and concrete that is nonetheless respectful of its more traditional neighbors."

Deutsch is the principal at Deutsch Insights and an associate professor of architecture at the University of Illinois at Urbana-Champaign.

"I wanted to become an architect since I was 6 years old in part because of this building," William Martin said. "My parents would put us in the car and drive down River Road and Boulevard East with expansive views of Manhattan from the back seat of our car. The antenna enhanced the value of the building ... by allowing for better reception for millions of people."

Martin is the founder of WJM Architect.

"The MAC hangs over the water, a simple collection of lines and curves inspired by flowers growing in the landscape of Rio de Janeiro," Peter Exley said. "A beautiful, sweeping pink line marks the pathway to the entrance of the building. It's the most charming arrival to any building: unpretentious, gentle, poetic, and steeped in anticipation."

Exley is a professor at the School of the Art Institute of Chicago and the founder of Architecture is Fun.

The Church of the Light in Osaka, Japan

The Church of the Light's architect: Tadao Ando.  (YouTube/A as Architecture)

"Tadao Ando is able to create beautiful spaces that embody monolithic presence, spacious, simple forms with an intriguing play of light, which appears to dance throughout the day," Frank Cunha III said. "The pushing and tugging of heavy forms and open space create a very unique, magical experience."

Cunha is the CEO and principal of FC3 Architecture + Design.

The Enterprise Centre at the University of East Anglia in Norwich, UK

The center is "a mixture of great architecture and sustainable design," Ben Adam-Smith said. "It also sits on a campus of buildings that in their era have tried to push boundaries."

Adam-Smith is a UK-based architect and the founder of House Planning Help.

Manus is the CEO of Heller Manus Architects and a former president of the American Institute of Architects.

The Kimbell Art Museum in Fort Worth, Texas

"Completed in 1974, it redefined how museums and art galleries used natural daylighting and is truly a modernist masterpiece," Bob Borson said.

Borson is the principal at Malone Maxwell Borson Architects.

"The rigid planes of the cantilevered balconies are pure modernist forms inserted into the heart of the forest," Bruce Turner said. "Most importantly, however, the thing that solidified this building as my favorite of all time doesn't show up in any photos: the arrival sequence to the house. You arrive on a small country road, turn into the property, wind your way through the woods, and the house finally appears in the distance."

Turner is a freelance architect based in New Jersey.

The Barnes Foundation Museum in Philadelphia

"It is highly publicized and perhaps getting too much play like a song on the radio, but when seen in person, I was truly inspired," Lee Calisti said.

"The building stands boldly, innovatively, looking to the future, while also respective its place and the past," says Jonathan Brown.

Brown is a senior associate at JHP Architecture/Urban Design.

The Bibliotheque Sainte-Genevieve in Paris, France

Banks is an architect for Shoegnome Architects.

The Salk Institute for Biological Studies in La Jolla, California

Manus is the CEO of Heller Manus Architects and a former president of the American Institute of Architects.

"Known to many as 'The Big Lebowski' house, it's one of those places that sits you down and makes you say 'whoa' because of its daring imagination," Evan Troxel said.

Troxel is a senior project designer at HMC Architects and hosts the podcast "Archispeak."

The TWA Flight Center was "designed before the age of computers and decades ahead of its time. The building uses concrete and glass to capture all of the excitement, wonder, and romance of jet travel," Joseph David said. "At every view and every angle, there is something new to 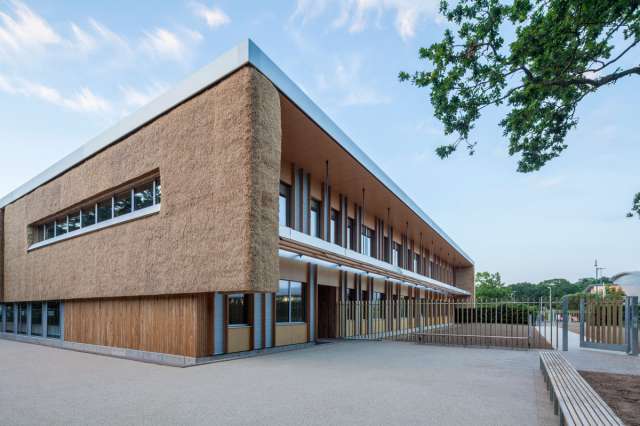