Maira Trevisan had baby Gabrielly on September 19, but was not entirely prepared for how big she would be.

Doctors at Cascavel University Hospital in Parana, Brazil, knew that the child would be bigger than average, but mum Maria admits she didn’t expect the baby to be so heavy.

Tipping the scales at a whopping 5.72 kilos or 12.61 pounds, baby Gabrielly broke the hospital’s 27-year-old record, which was when the maternity unit registered an infant weighing 5kgs.

The 36-year-old mother who has three older children, said: “It was a bit of a shock and surprisingly uncomfortable the first day I took her into my arms. I didn’t expect her to be so heavy and so long. “But I’m now getting used to her,” she added laughing.

Her daughter measures an astonishing 54 centimetres or nearly 22 inches long and is almost twice the weight of the average newborn.

According to Guinness World Records , the largest baby ever born was ‘Babe’, born to Canadian Anna Bates in January 1879. She died 11 hours after birth, and weighed 22lbs.

Gabrielly spent eight days in hospital after complications during birth. 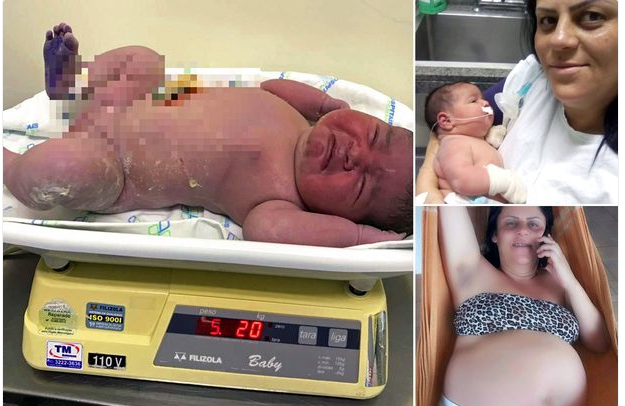