Family And Friends Abandon Me - Man With Swollen Stomach 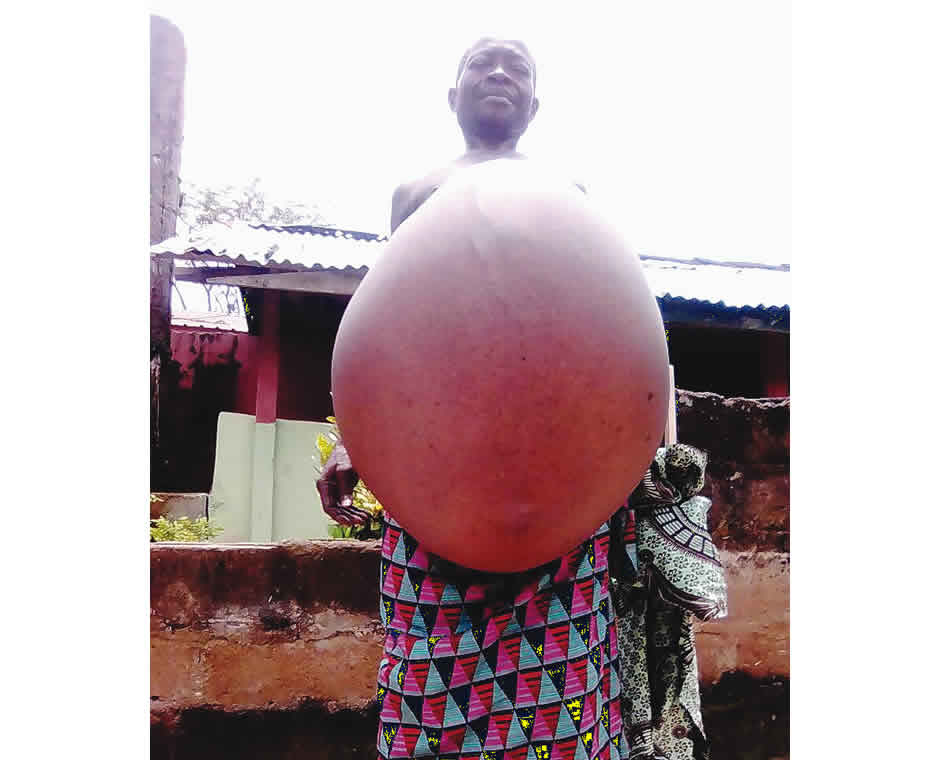 The sight of Justice Uzondu would certainly elicit instant reaction of perhaps shock, fear, pity or amazement. People with such looks are only imagined and captured in the make-belief world but Uzondu is living, struck with a strange ailment that would even make the stone-hearted shrink or break down with emotions.

The 62-year-old has a height that is slightly intimidating. But his height is insignificant; what would jolt anybody who sights Uzondu is his extraordinarily protruding stomach. It is big!

Lying helpless in a mat at a corner of his thatched home in his village in Umuonyeka-Umueze Ihitteaforukwu in Ahiazu Mbaise Local Government Area of Imo State, the man looked helpless, hopeless and possibly, miserable. It was apparent Uzondu would be asking his God; why He allowed such condition to befall him.

He was once healthy, strong and even agile. His travails started eight years ago and since then, his state grew from hopeless to helpless.

While telling our correspondent the story of his life, Uzondu tried as much as he could to recount how he found himself in such a pathetic state.

According to him, his plight started eight years ago when he came home on holidays from Lagos where he was a driver.

He said, “I was a private driver for someone based in Lagos. I came home for holiday and I decided to climb my oil bean (ukwa) tree to harvest it.”

That was his undoing. If he had known, he probably wouldn’t have bothered the ukwa tree as just as he was about to harvest the oil bean, he fell from the tree.

“I broke my spinal cord. I couldn’t walk again. When I fell, I lost consciousness. I passed out but God revived me through the medical treatments I got. I had to be confined to a bed for two years.”

And as if that was not enough trouble, his stomach started getting big and bigger and bigger till it got to this unimaginable state.

But when it got to the stage where he couldn’t take it any longer, he sought medical attention in several hospitals where, according to him, he was diagnosed with having “accumulated fat” in his stomach.

“I have gone to so many hospitals, including National Hospital, Abuja where I was asked to do so many tests including a CT scan. It was the scan that revealed that I have accumulated fat. The doctors said it happened because I couldn’t walk and because I have been confined to a place for a long while. It was in Umuahia, Abia State that a group of Indian medical experts also carried out more tests.  They also said I was suffering from accumulated fats in my stomach which was brought about by the spinal cord injury that I sustained,” he said.

He even had to change his diet but it did not reduce the fat in his stomach.

“I had to stop eating fatty food. The doctors advised me to stop taking such food so as not to aggravate this condition. But nothing has changed. My stomach is this big. I am really disturbed,”  he said.

But even as the strange ailment was medically diagnosed, it didn’t stop friends and family from deserting Uzondu as people felt he must have committed one abomination or the other that eventually had him struck with this strange ailment.

Five years ago, Uzondu said his wife, Eucharia, who couldn’t stand the sight of him in that state, deserted him.

“My wife left me with our 10-year-old child. I couldn’t take care of our son because of my condition, so somebody had to take him to train him for me. My wife said she couldn’t continue living with me as she didn’t understand this kind of illness. She said she was tired of taking care of me. I have not seen her and I do not know where she is since she left me,” he said.

But for his niece, 24-year-old Blessing Uzondu, a student of Rufus Giwa, Polytechnic, Owo, Ondo State, Uzondu would have died of hunger.

He informed Saturday Punch that it has just been Blessing who comes around to take him to the hospitals and cook for him since his wife abandoned him.

“When she comes home, she cooks plenty food that would last until she comes back next time. She makes sure that everything is in order, including my drugs before she leaves for school.”

And since Blessing comes home once a week, Uzondu said he is just able have a bath once a week, at least when his niece helps him to clean his body.

“There is no other person to help. I just manage to have my bath once a week, when Blessing is around. If she goes, that means I will not bathe until she comes back,” he said.

Aside from the emotional and psychological pains he has had in the last eight years, Uzondu said the physical pain is more excruciating and exasperating.

“I have endured excruciating pains and trauma for years. I experience loneliness. I have been stigmatised by everybody. People have abandoned me. My world has crumbled at my feet. I lost my job, I can’t even get another job and I don’t know when my condition will improve for the better.  I had spent my little savings on my medical expenses. To even eat now is problem because there is no money. I know I am hard working. If not for this condition, I would have been working. I only urge well meaning Nigerians to come to my aid and help me get out of this situation by contributing to my surgery,” he said.

Uzondu said so many people look at him with contempt and disdain.

“Nobody wants me to sit beside them in the vehicle anytime I have to board public transport for medication. They would accuse me of being the source of their troubles. It has been so painful. I remember during one of my trips to Lagos where I had also gone to seek medical attention, a man accused me of sleeping with another man’s wife. He said I brought curse upon myself because of the abomination and that’s why my stomach is this big.”

But Uzondu denied all the allegation and superstitions that have been attached to his condition, while claiming he is a staunch Christian.

“I haven’t done anything abominable. I have never slept with anybody’s wife. My case is a medical condition and it is nothing spiritual. I know I will get out of this one day,” he said.

Uzondu said he stays weeks without seeing any other soul. His companions are only the chickens and the lizards in the compound. Nobody comes to ask how he is faring or managing. He is just left alone to die.

“But I don’t want to die. The Indian doctors said for me to be cured, I would need around N6m for the operation in India. I don’t know how I can raise this. I don’t know what to do again.”

Uzondu said the doctors told him that he urgently needs to be operated upon otherwise he would lose his life.

“The medical experts told me that the N6m is for a medical surgery abroad, especially in India. The amount included the medical bills, my flight ticket and accommodation,” he said.

However, when Saturday Punch reached out to Dr. Ugochi Onuh of University of Nigeria Teaching Hosiptal, she advised that Uzondu should repeat the abdominal CT scan.

“There is no way I can make diagnosis based on mere photograph that you sent to me. However, his saying that CT scan said this is accumulation of fat is very questionable and none of the radiologists I showed the picture agreed to its possibility. I also think it is unlikely that the stomach issue is related to the fall he had. The fall should affect the back and not his stomach. If he had a fracture for his age,  no matter the height he fell from, then we could look out for malignancis that could make the spine to be fragile. even in children, recovering from spinal cord injury is very  slim, let alone an adult.

“For a man his age, having what is medically called Egg on Stick appearance is top on the list of differential diagnosis. He could also be suffering from Abdominal Lymphomia or endomyocardial fibrosis or decompensated liver cirrhosis with or without malignant transformation. It is essential he repeats the abdominal CT scan. Otherwise, I would also advise he should go and do an ultrasound so that he would have something more concrete.”  she said. 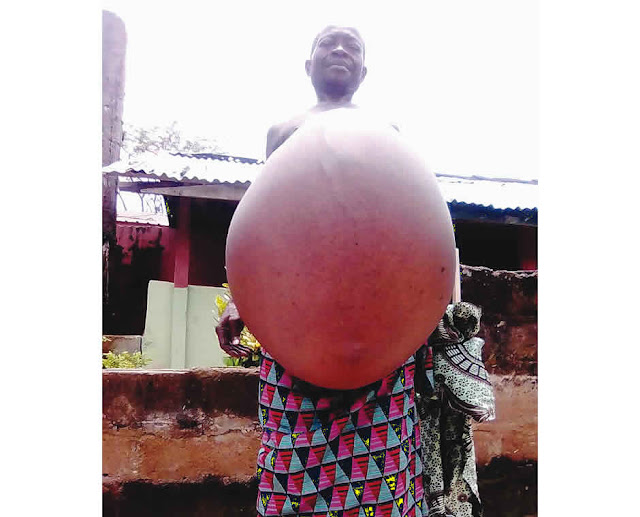