Five Super Eagles Players Out Of Training Due To Injury

The left back twisted his ankle as he tried to stop the ball during the first practice game that involved four players on each side, and laid on the pitch injured before he was attended to by Super Eagles medical team.

Manager Gernot Rohr had to call for a break and Echiejile was replaced by Leicester City midfielder Wilfred Ndidi when the session resumed.

For about twenty minutes, an ice pack was wrapped around the defender's ankle before it was removed by the physiotherapist.

The severity of Echiejile's ankle injury has not been determined yet as he managed to wear his boots and took part in a stretching exercise after the second practice game.

Whilst Echiejile is the only out-and-out left back named by Rohr in his 23-man roster, Ola Aina, who was not sighted at today's training session, can also operate in that role, though he is right-footed and predominantly thrives as a right back. 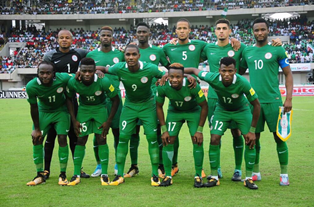