Nigeria’s President, Muhammadu Buhari has disclosed that the Igbos have not been fair to him. The president said this through Director General of the Voice of Nigeria, Osita Okechukwu, Okechukwu. According to him, Ohanaeze Ndigbo did not reply to a congratulatory letter written to the Association by Buhari, after the election of its current National Executive Committee.

Okechukwu’s disclosure followed the outrage expressed by Ohanaeze over Buhari’s 57th Independence Anniversary speech, in which he took a swipe at Igbo leaders, due to the agitation for Biafra in the South-East.

Reacting to the President’s speech, Ohanaeze, through its National Publicity Secretary, Prince Uche Okpaga, had said the agitation should be blamed on Buhari’s actions, rather than on Igbo leaders.

However, speaking on Monday, VON DG, Okechukwu, suggested that the leadership of Ohanaeze has been hostile to Buhari.

He noted that the President General of Ohanaeze Ndigbo, Chief Nnia Nwodo, did not reply a letter written by Buhari to congratulate him, after he was elected as Leader of the apex socio-political body of the Igbos.

“Ask my big brother, Chief Nnia Nwodo, President General of Ohaneze Ndigbo, whether he replied the profound congratulatory letter President Muhammadu Buhari wrote to him immediately he was elected before he joined (Leader of the Indigenous People of Biafra) Nnamdi Kanu?

“The same Buhari wrote a letter on 7th November, 2014, to the then President General of Ohaneze Ndigbo, calling for dialogue before the (2015) election. It was never replied”, Okechukwu said.

He noted that the perceived marginalisation of the Igbos in the President’s appointments, over which Ohanaeze had raised concerns, would be resolved with time.

“Appointments are transient and temporary, and in no distance time, Mr. President will rectify it. One understands that some Service Chiefs are heading to retirement, let us wait and see”, the VON boss said.

However, he also noted that Ohanaeze was not doing enough to attract investment to the South-East.

In the same vein, he urged Igbo Leaders to support Buhari to revamp physical and social infrastructure in the zone 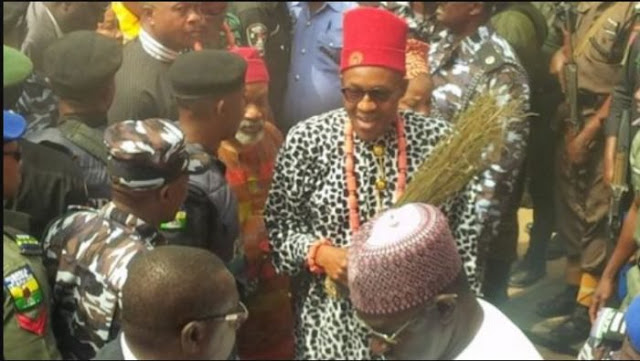