It was an uneventful afternoon on Sunday, October 15 at the Municipal de Ipurua as host Eibar played out a boring colourless goalless draw with visiting Deportivo La Coruña in a La Liga fixture.

The two mid-table La Liga teams had just nine shots on target between them in the game, a true reflection of the dull game.

But sometimes you have to go through the rough to get the diamond and from this game, history was made.

The Eibar and Deportivo La Coruna’s game has dominated the Nigerian sports media since Sunday because of 18-year-old goalkeeper Uzoho Francis.

Uzoho made his debut for Deportivo in the game, keeping a clean sheet to help his side get a point away from home.

He didn’t have much to do in the game especially in the first half when Deportivo dominated play. But he also showed impressive composure and attention in the game.

He did that very well, guarding his near-post very well to save a shot from the corner of his box in the 12th minute.

He had to wait until the 72nd minute before his next save, calmly collecting a tame shot. In the 80th minute, he showed how decent he was, staying on his toes during a corner kick to quickly dive to catch a shot from the edge of his 18-yard-box.

He was beaten in added time but the Eibar goal was rightly ruled out to be offside.

It was a record-making appearance for the Nigerian who became the youngest foreign goalkeeper to debut in the La Liga.

With the number of legendary non-Spanish goalkeepers we have seen in La Liga history,Uzoho’ achievement is a huge one.

“A day that will never disappear from my memory,” Uzoho said about his debut.

Where it all started

Uzoho’s professional football career came to prominence when he was included in the Golden Eaglets squad for the 2013 FIFA U-17 World Cup.

He was with the team which had the likes of Kelechi Iheanacho, Isaac Success and Dele Alampasu. These talented youngsters led Nigeria to the title.

Uzoho, however, did not play in any game at the World Cup and was Golden Eaglets third goalkeeper at the tournament. He only made the cut following the injury to Adeyinka Adewale who was the first choice when Nigeria finished second at the U-17 Africa Cup of Nations (AFCON) earlier in the year.

While the likes of Alampasu continued to be in the local limelight, Uzoho had been quiet since his sojourn with the Golden Eaglets in 2013.

He was with the famous Aspire Academy in Qatar before he signed for Deportivo La Coruna in 2016.

After a year with the youth team, Uzoho is gradually making his way into the first team and his impressive La Liga debut could fasten the process.

He surprised everyone by naming Uzoho in the starting XI against Eibar with former Manchester City goalkeeper Costel Pantilimon -who is on loan from Watford- settling for a place on the bench.

Przemysław Tytoń was not named for the game while Ruben Martinez is currently injured.

Super Eagles boss Gernot Rohr has similar problems in his goalkeeper’s unit. With his first choice goalkeeper Carl Ikeme out indefinitely as he continues to battle acute leukaemia, no one has held down the No 1. shirt.

Daniel Akepeyi’s pitiable outing against South Africa in June meant he is not reliable enough and while FC IfeanyiUbah goalkeeper Ikechukwu Ezenwa has impressed in three games for the Super Eagles,  he is still very culpable of making rash decisions. Ahead of the 2018 FIFA World Cup, Rohr’s goalkeeping options are very open.

With Carl Ikeme out for an extended time, Super Eagles boss Gernot Rohr has not decided on his first choice goalkeeper  (Twitter/Carl Ikeme)

These uncertainties in the goalkeeping units at both club and country present Uzoho with a huge chance to have his break-out year.

Despite his impressive outing against Eibar, he faces an uphill task to hold down the No. 1 jersey at Deportivo La Coruna.

If he manages to do that, then he will surely be on the Super Eagles plane to Russia. 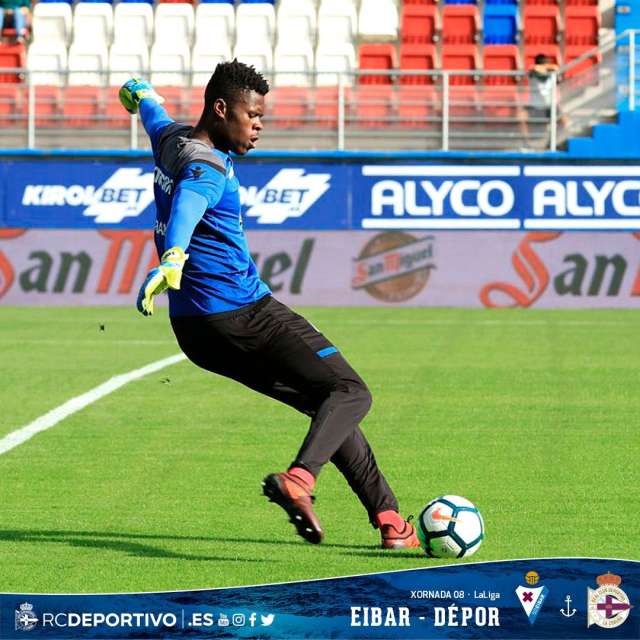