Menu
Home » Entertainment » Must Read ] Do You Want To Know How Funke Akindele Cope With Her Step Kids?? Then Read This

Must Read ] Do You Want To Know How Funke Akindele Cope With Her Step Kids?? Then Read This

Even though Funke Akindele is yet to become a mother, she has become a step-mom for three JJC Skillz children. Today, we are going to tell you about one of these kids, who is actually not a child anymore. We will be talking about Funke Akindele daughter, or rather stepdaughter, Tamira Bello. Find out more about this young lady and take a look at her gorgeous pictures.

Who is Tamira Bello?

Tamira Bello is the eldest daughter of JJC Skillz and his first baby mama Taiye Fajemisin Adeyemi. She was born on February 9, 1997, and her zodiac sign is Aquarius. In August 2016, after her father married the talented Nigerian actress Funke Akindele, Tamira became Funke Akindele's daughter.

Even though the two are not related by blood, the two ladies get along very well. To be fair, Tamira even looks like she could have been Funke Akindele child!

Tamira and her mother Taiye

The 20-year-old lady lives in the United Kingdom with her mother, step-father and siblings. However, this does not stop her from keeping in touch with her father and the rest of her family. Tamira is very close to them all, including Funke Akindele.

Now that you know the basic stuff about her, it is time to talk about some interesting things we have managed to find out about Tamira.

Interesting facts about her life

Despite being quite young, Tamira is a very exciting and fascinating person. See for yourself:

Tamira studies Media and Communications at the Birmingham City University in the UK.

She has an interest in modelling and photography. Her favourite style of photography is portraits, and she is very good at them. Her works are stunning. And her selfie game is very strong.

In addition to that, Tamira really enjoys travelling, nature and beaches. It seems like she has been to almost every country in Europe!

Her favourite city is London.

On her old ask.fm account, Tamira admitted that her favourite seafood is prawns.

She is currently dating a cute European boy named Tom (@tombulldryer_ on Instagram). He studies Film VFX at the same university as Tamira. He is a year older than she is, being born on May 5, 1996.

Tamira is very close to her father. He calls her the best gift he could ever wish for. As a matter of fact, JJC dedicated a whole song to his daughter. It is called Somebody Loves You, and it is very touching. Tamira even starred in the music video for the song.

Tamira was actually the one responsible for the marriage between JJC and Funke Akindele. She was the one that encouraged her father to marry this wonderful woman.

To add to the previous fact, because of Tamira, we were able to find out about the private wedding ceremony of the happy couple in London. She posted quite a lot of pictures and videos from the event on her Snapchat.

Tamira and her little sister

If you want to follow her life, you can find her on various social media. Tamira is most active on her Instagram (@tamirabello), Snapchat (look for Tamira Bello) and Facebook (facebook.com/itstamira). She also has a Twitter account (@tbelloportraits), where she posts her photo portraits. However, it has not been updated since last year.

And that is all you need to know about Tamira Bello, the daughter of JJC Skillz and the step-daughter of Funke Akindele. She is young, beautiful, smart and talented. We hope to see more of her in the life of Funke and JJC, and we wish her all the best. 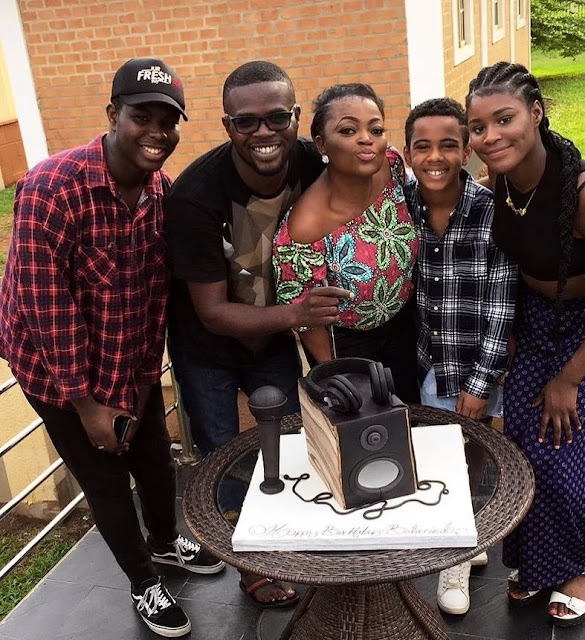