In Nigeria, men are accustomed to marrying women younger than they are and the billionaires are no exception as these wealthy men marry models, beauty queens and the very best of women.

Stargist.com presents 7 Rich men who married women way younger than they are.

The former Edo state governor, Adams Oshiomole is married to Lara who was a famous model and was said to be twenty-nine years old when they married while he was 63 years old. Their ceremony took place in Edo State and attracted press’s attention.

Banke Oyelami who was 23 year old and former Miss Osun State got married on the 24th of August to 48 year old politician Hon Rotimi Makinde.

Billionaire businessman and chairman of Champion newspaper, Emmanuel Iwuanyanwu gave marriage a second shot at age 72 and married a 26 year old, Frances Chinonyerem Enwerem, who was 26 years old and the daughter of one of his late wife’s close friends.

Former Beauty Queen, Dabota Lawson was said to be in her mid 20s when she married billionaire businessman, Prince Sunny Aki who is said to be in his 50s in an elaborate ceremony on December, 13, 2014 at the Sky Terrace Hall, Oriental Hotel in Lagos. Though they are currently no longer together.

In 2004 billionaire Musa Danjuma tied the knot with one of Nollywood’s most sort after actress Caroline Ekanem. He was 54 and she was 24. Even though they are now divorced, they had 3 kids. 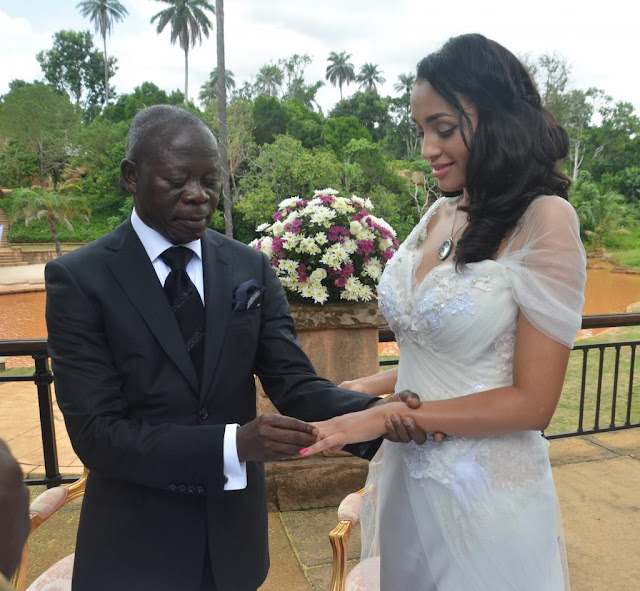