Eminem And His Daughter History Till Date [ Must Read

Eminem may be one of pop culture’s most controversial figures, but what many people may not know is that he’s a dedicated and doting dad behind the scenes.

The record-breaking rapper has one biological daughter with his ex-wife, Kim Scott.

After Hailie was born in 1995, she quickly became her father’s muse and motivation. Eminem has included countless lyrics about Hailie in dozens of his hit songs, and many of those songs are solely about her.

Hailie remained out of the spotlight during her young adult years, focusing on her academics and private life. But recently, the internet has rediscovered her social media pages, and now that she seems to be posting more frequently, people are freaking out over her beauty and confidence.

On October 17, 1972, a little boy named Marshall Mathers III was born in in St. Joseph, Missouri.

He began rapping with his high school friend at the age of 14.

Marshall went on to become the world famous rapper known as Eminem. He rose to stardom in the late 90s and early 00s and became a household name.

In 1999, Eminem married Kim Scott just as his career took off. But the couple went through a nasty divorce two years later.

They remarried in 2006, but things quickly fizzled out a second time.

Meanwhile, Eminem rapped about his relationship with Kim using anger and brutal honesty.

In the midst of their famously tumultuous relationship, Kim and Eminem welcomed the birth of their daughter, Hailie Scott.

Hailie’s presence in Eminem’s life inspired him to write about his experiences as a father.

Fans began to see his softer side, and they were eager to watch Hailie grow up.

Eminem’s Grammy-nominated song “Mockingbird,” which he released in 2004, is an emotional love letter he wrote for Hailie.

The lyrics of “Mockingbird” tell the story of Eminem and Kim’s relationship and how it affected Hailie.

The song paints a clear picture of a father who loves his daughter more than anything.

Eminem and Kim agreed to share joint custody. These days, they keep in close contact and remain friends and co-parents.

“We’re just trying to raise our kids together and make it as normal for them as possible,” she said.

Eminem remained a musical icon thrust into the spotlight, but also a dedicated and doting dad behind-the-scenes.

Hailie began to see successes of her own. She grew into popular and outgoing teenager who took part in many school activities.

The media began to take notice of Hailie after she was named homecoming queen at her high school.

Eminem watched the ceremony from inside the school as he didn’t want to cause a scene.

One parent said he opened the door, looked out at Hailie on stage and proudly shouted, “That’s my daughter!”

By the time Hailie was 19, she was keeping her life private on social media.

Despite her famous dad, the gorgeous college student is living a relatively normal life at Michigan State University.

In 2017, Hailie’s Instagram account was rediscovered by the internet, and people couldn’t help but notice how stunningly beautiful she’d become.

She has a boyfriend and adorable dog, loves fashion and cosmetics… but doesn’t seem to take after her dad’s rapping skills.

Some people may think of Eminem as “inappropriate” or “crude,” but it’s amazing to see someone so famous and controversial help to raise such a beautiful and successful daughter.

What a transformation Hailie has undergone in the last 21 years. 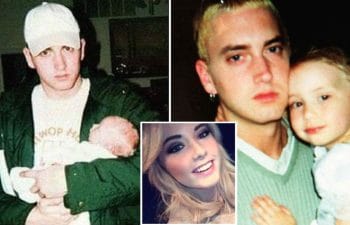