Annie and 2face Idibia on their wedding day  (Fabmagazineonline)

Celebrities are known for having big weddings which are usually the toast of the town.

Most times when these weddings are elaborate, you tend to see other celebrities in their droves attend and making a statement, especially with their outfits and gadgets.

We take a look at five celebrity weddings that have blown our minds.

The wedding ceremony between Tiwa Savage and Tee Billz was one that would remain the talk of turn for years to come. Just like most celebrity weddings, it had the who is who in the entertainment industry in attendance. The traditional wedding which was held in Lagos in November 2013, was well attended as was more like a concert than a wedding because every music showed up and performed. It was so big that it was shown on live T.V.

When it was time for the white wedding, these guys took close family and friends to Dubai where they also had a beautiful wedding reception. Even though a few years after the wedding it almost collapsed as a result of infidelity accusations, the beautiful couple has been able to bounce back and rekindle their love. They are blessed with one child.

Just like that of Tiwa Savage and Tee Billz, the wedding ceremony between the actress, Osas Ighodaro and actor Gbenro Ajibade had a very flamboyant wedding in 2015. These guys had their traditional wedding in Benin City, home to Osas at one of the most exquisite hotels. It was also a very big wedding as all the stars and celebrity from the entertainment industry turned up for the ceremony. The wedding was also shown live on a television station.

For the white wedding, the couple played host to close family and friends at a grand reception held in the United States of America. They are also blessed with a child.

These guys are the latest celebrity couple to be joined in holy matrimony. Banky W and Adesua Etomi had a star-studded traditional wedding in Lagos in November 2017. It was a well-attended wedding, the venue of the wedding was beautifully decorated and it sure did shut down the internet when pictures from the wedding started filtering out.

Just like other celebrity couples previously mentioned on this list, these guys took their close family and friends to Capetown, South Africa for their white wedding. It was another beautiful occasion as the venue of the reception could match for that of any other elite wedding around the world.

Dr. Sid and Simi Esiri got married in August 2014 in Lagos. Coming from a record label that was at its prime at that time, Dr. Sid had all the celebrities in the entertainment industry that mattered attend his wedding. What is worthy of note was the reception of the wedding at Oriental Hotel, it was so beautifully decorated it looked like a royal wedding.

However, there have been rumours filtering around about the crisis rocking the three-year-old marriage. Even though both couples have kept mute over the issue, indications of cracks in the marriage became evident when they both unfollowed each other on Instagram and Simi stopped wearing her wedding ring.

2Face and wife, Annie Idibia on their wedding day  (Instagram)

After years of their relationship, 2Face Idibia and Annie Idibia finally tied the knot in 2012. The traditional wedding which took play in Akwa Ibom, Annie's home state saw everyone who had relevance in the entertainment industry attend. Even the then Governor of the state, Godswill Akpabio was in attendance. He even gifted the couple, two brand new SUVs as wedding gifts.

Not surprisingly, after their traditional wedding, the Idibias along with close family and friends moved to Dubai where they had their white wedding which was a real beauty to behold.

Annie and 2face Idibia on their wedding day  (Fabmagazineonline) 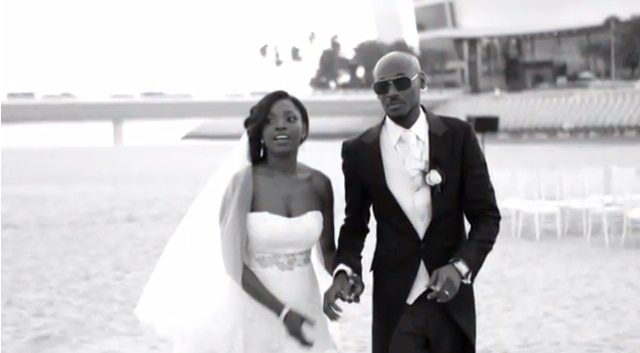