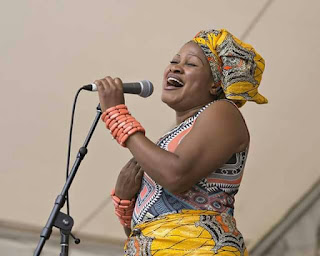 Sonia Aimy: Singer/Songwriter/Actress Ignites Audiences with African World Music
With her inimitable, velvety voice, Nigerian-born singer, songwriter and actress Sonia Aimy is
the quintessential embodiment of contemporary African world music. Her sound blends Afro-
jazz, highlife, and call-and-response African griot tradition, in easy flowing, yet virtuosic
performances.
Her irresistible rhythms and melody and infectious joie de vivre unite audiences of diverse
backgrounds. Her second CD, Nigerian Spirit 2017, is an incantation of hope. It offers spiritual
nourishment and intellectual stimulation, and is a joy to the senses.
Sonia Aimy has won fans in Europe, Africa and Canada through her on stage appearances with
the likes of African musical legends Hugh Masekela, the Mahotella Queens, Miriam Makeba,
IGNAWA and Williams Parker. She recently perfromed at FELABRATION and was the only
international artist requested by the Oba Ewuare II, Oba of Benin to perform at his 1st coronation
anniversary and birthday.
Fluent in English, Italian and several African tongues, Aimy grew up speaking the local Edo
language of her native Benin City in southern Nigeria. Through her music, she also explores
Yoruba and Hausa (both from Nigeria); as well as Obamba (Gabon), Wolof (Senegal), Lingala
(Congo), Kiswahili (East Africa) and Somali.
It has been Aimy’s passion since she started singing at age eleven to touch hearts and souls. From
her mother, she gained an early education in the folklore of her people, the Bini, an interest she
extended into traditional music, storytelling and dance. Immigrating to Italy, she studied jazz
music and interpretation, as well as theatre arts, crafting a sound that has become distinctly her
own. Motherhood is an important theme that often appears in her lyrics, along with a deep
concern for justice.
Sonia Aimy has also been recognized in Italy, Nigeria and Canada not only for her obvious talent
but also for her commitment to end human trafficking, and for the deep sense of her Nigerian
heritage, which gives a spiritual grounding to her work wherever she performs.
For her many endeavors, Aimy was chosen Best Positive Figure for Youths in Turin and Caserta
(2005/2006); was named a Millennium Models Nominee among fifty Nigerians in the world by
Nigeria’s Platinum Bank Limited in 2003; and in 2005 was nominated by Italy’s AfroLife
magazine as one of the Top Ten leading Nigerians in that country.
👇d👇👇👇
DOWNLOADMUSIC