So Many Hash Comments About The Photographer [ Must Read

In May 2017, a man from St. Louis got down on one knee and asked his girlfriend to marry him. The adorable moment was captured in a Facebook photo

Jessica McDaniels, a 32-year-old hairstylist, stood behind her happy friends, smiling wide and taking a few pictures of her own. But after the engagement photo was shared online, someone cropped Jessica out and wrote a caption insulting her teeth. The post went viral, and soon, tens of thousands of cyberbullies were mocking Jessica’s appearance online.

But Jessica was no stranger to bullying. She’d been trying for decades to get her crooked teeth and severe overbite fixed, but her family could never afford it.

As a child, Jessica was hearing-impaired and underwent many surgeries on her ears. Her adult teeth, which were always pushed outward for some reason, didn’t even grow in until she was 12.

The older she got, the more painful her teeth became. Sometimes it was so bad, she could barely eat… but she kept the pain and embarrassment to herself.

Jessica apologized to her newly engaged friends for “ruining” their special photo. But of course, she did nothing wrong.

While the cruel internet bullying persisted, one of Jessica’s friends started a GoFundMe page to help her. And when her story ran in the local newspaper, one dentist in particular wanted to give Jessica a brand-new smile — completely free of charge.

Watch the video below to see Jessica’s incredible transformation. Bet those horrible cyberbullies didn’t think they were ultimately making Jessica’s lifelong dream come true… and giving her the last laugh 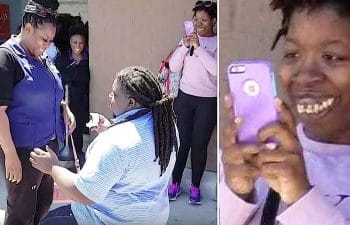