What makes a song a hit? Call and response hooks? Watery lyrics? Thunderous melodies? What then separates the mega hits from the regular ones? This list attempts to answer these two questions. The songs are arranged in ascending order.

The third single from Wizkid’s mixtape, Sounds from the Other Side and second collaboration with Canadian superstar Drake was the first time Wizkid charted on the UK Singles Chart as a lead artiste. Apart from Nigeria where the single was a mega hit, Wizkid also charted in Canada, France, Netherlands and Scotland. Sarz is on the beat of this melodic fusion of afrobeat and Caribbean vibes.

Nothing sells quite like controversy, and folk/pop singer 9ice took full advantage of some contentious lyrics from his crossover hit from late 2016 to dominate the conversation in the first half of the year, with celebrities and fans alike placing themselves firmly on various sides of the argument. For Living Things, Young John regurgitates a familiar beat and blends melodic elements of Fuji, Pop and Highlife. The result? One sick thrill.

Niniola came into her own this year and Maradona, a groovy lamentation of a philandering partner set to beats lifted directly from South African house music. If she had been teasing all along, Maradona is Niniola announcing her readiness to play in the big leagues. While Yemi Alade has been hunting for another Johnny, Niniola pulls off something more interesting, using Alade’s tried and true formula, but giving it a side of spice.

Kiss Daniel may be a cautionary tale these days, but this last gift to the fans as a full-fledged member of G-Worldwide was also one of his most rewarding efforts. Yeba builds to a slow burn, updating the seventies laid back tempo of Ebenezer Obey for a more restless audience. Yeba’s songwriting does not match up to the stellar production and instrumentation that Killertunes achieves on the record but Daniel’s smoky voice and precise delivery seals the deal every single time.

All Over- Tiwa Savage

The lead single of pop queen Tiwa Savage’s surprise EP, Sugarcane is one of the most accessible pop hits of the year. Ms Savage layers her sultry vocals promising love and seduction atop a ridiculously generous beat provided by Mavins inhouse talent, Baby Fresh. All Over has one purpose only, besides serving as another glittering tone on Savage’s crown. It is an unmistakable call to the dance floor. The lyrics are on the watery side but this is pop music not rocket science.

For the past five years at least, Wande Coal, has been in perpetual comeback mode, each song and eventual album, bringing him just to the brink of that whitehot territory he occupied during his Mo’Hits heyday. Iskaba is the latest ready-but-not-quite effort to come out of Wande world. Iskaba is gibberish, but it is fascinating gibberish. The song nearly peaks at the very beginning when Wande screams, ‘’Oh my darling!’’ but the following three minutes sustain the excitement promised by those first three words.

Mad Over You- Runtown

Mad Over You was released last year but its influence has loomed largest this year, both as a ready for play single, and as a precursor to countless imitators. Marrying Ghanaian highlife sounds with his afrobeats background, Mad Over You which peaked on the Billboard Twitter Top Tracks at number 38 is one of the songs that defined the year in music. It also sparked a mini battle for ownership of the Ghanaian sound between Runtown and Mr Eazi.

After trying out some adult fare for his 2016 album, The Glory, Olamide, King of the streets and Mayor of the Mainland went back to his hood, Bariga to rediscover his hitmaking ways. The result was pure Olamide. Wo! Is that peerless ability to transform realities of mundane living into sing-along lyrics and an irresistible hook. Masterminded by the reliable Young John the Wicked producer, Wo! Is proof that Olamide is only as good- or as bad- as the fans want him to be.

‘’If you no get money, hide your face’’ So began Penalty, the banging street anthem serviced to radio and to every club dj and street party by Small Doctor, the latest indigenous rapper to demolish language barriers on his way to mainstream ubiquity. Penalty is rough around the edges and depending on what side of the divide you are own, is representative of everything that is wrong with pop music but having tasted the dividends of dumbing down, it is hard to see Small Doctor going back.

The strain of starting over was present in some of the artistic success stories of 2017 and Davido was the poster boy. Having freed himself of a not entirely productive contract with Sony, Davido came back home, to the familiar embrace of serial hitmaker, Tekno and the result of this collaboration was a smash that was heard from Lagos to Durban. If with its drum kicks and leisure pacing, birthed follow ups like Fall and Mama from DWM signee, Mayorkun. They are all essentially the same song. 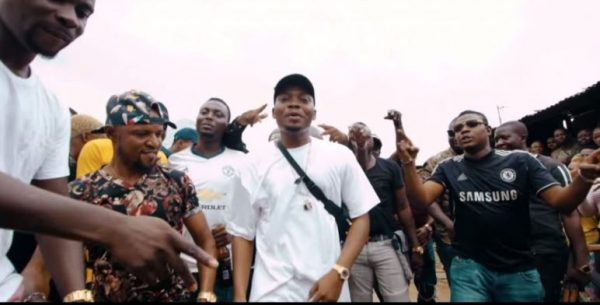