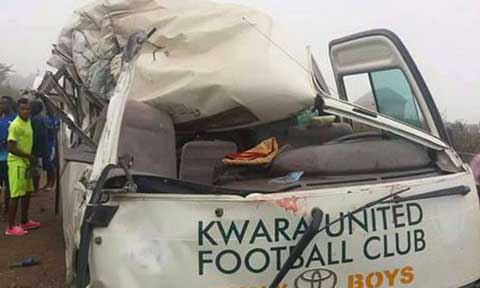 Players and officials of the Kwara United football team, were on Wednesday, involved in a road accident which seriously affected their team bus and injured some of the players.

The accident occurred along the popular Lagos-Ibadan highway when the players and officials were returning to their base in Ilorin after participating in the super 4 tournament in Lagos.

The injured players have been taken to an hospital where they are receiving treatment.

The team’s physiotherapist, Gbenga Akinola, confirmed to TheCable that no life was lost in the accident.

“There was no loss of lives. Nobody died, we have the case of five people sustaining series of injuries.”

“Everything is under control, hopefully all will be well.”

“I won’t like to disclose the names of those injured for I am still in shock over the incident.” He said.