Policemen in Edo state have reportedly arrested two out of the four internet fraudsters who used their grandmother for money rituals.
Four men have been accused of killing their grandmother, Grace Ovbiedo, for money ritual in Edo State, according to TheNation.
The suspects are - Dickson Oluka, Salaya Oluka, Martins Oluka and Austin Enayi. However, two of the suspects (Dickson and Salaya) have been arrested by the police while the other two are currently on the run.
A live tortoise used for the purpose is in the custody of the police to be used as exhibit against the suspects. The quartet reportedly tied the tortoise to their back as instructed by a native doctor to commit the murder.
The incident occurred on December 12, 2017 at No. 28 Asowata Street, Ohovbe quarters, Ikpoba-Okha local government area of the state.
It was gathered that the suspects who are internet fraudsters had consulted a native doctor on how they would become rich.
A family source said the native doctor instructed them to tie a live tortoise to their back and kill someone very close to them before they would become very rich.
The suspects on getting home, strapped a tortoise to their back and smashed the woman’s head against a wall.
They were reportedly caught while attempting to dispose the body of the deceased.
Edo Police spokesman, DSP Chidi Nwanbuzor, who confirmed the incident, said a manhunt has been launched for the other two suspects. 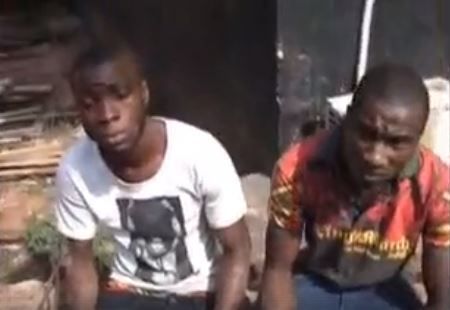