Boy Caught Videoing The Nudity Of A Fellow Female Student 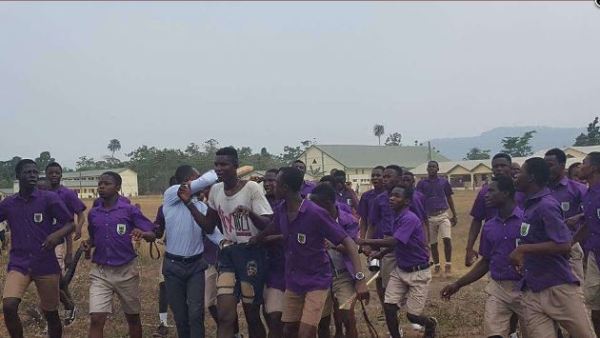 The girls were taking their bath close to their dormitory. The suspect was spotted by a female student who was naked when the camera light flashed on her.

She raised an alarm which attracted other male students of the school to arrest the suspect. The SHS boys tried to arrest the young man when he attempted to run away.

The suspect was, however, assaulted and handed over to the school authorities and later taken to the police station at Akyem Tafo Police command.

This is not the first time school students are caught committing several offenses in school;

An 11-year-old girl who was also seen on a surveillance video placing the handwritten under the assistant principal’s door claimed that another student forced her to place the note under the office door. The threat read;

“I will bring a gun to school to kill all of you ugly ass kids and teachers bitch. I will bring the gun Feb. 16. 18. BE prepared bitch!”

The girl who was visually upset and crying as she was being questioned, produced a written confession after being confronted by authorities.

However before the little girl who identity was withheld because she is a minor, was taken into custody by Davie police and put in the Broward Juvenile Assesment Center, she claimed that another girl threatened to have another friend fight her.

The student also shared a separate confessional note, which explained her anger was over being bullied. “I placed a note under the AP door and I got caught on tape,” the note says.

“My friend Sarai to write the letter or she will get her friend to fight me because she does not like because someone said that I like (name withheld). So to avoid getting in a fight with her friend, I put the letter under the door