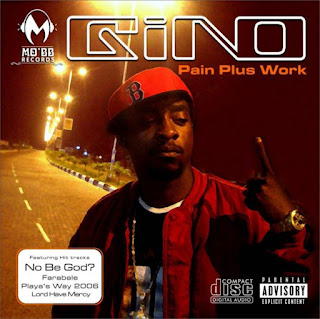 Okay, just as is starting to become my frenzy for throwing back carefully selected materials, I bring to you 3 materials from the year 2007 from no other than Gino. Yeap , here are 3 materials from the March 2007 released album from Gino, titled “ Pain Plus Work [Explicit] “, with production credits going to Sossick . The 20 -track album which span over a time period of 78:55 minutes sure was a superb body of work on a large scale as released under Soundville Music Company and was marketed/distributed by Obaino Music. Okay, too much talk; peep in to these 3 materials respectively titled “ No Be God? ” which featured C-Mion [ this man came through recently with a track titled “ I’m Not Alone“, featuring
Jaywon], “ Farabale ” and one of the most funny album skits I’ve ever heard, “ Time Out [with Sir Jeff] “; all tracks recorded and mixed at MO’BB Studios a.k.a The Kitchen . Notwithstanding, there were other major materials on this album in the likes of “ Playa’s Way 2006“, “ Lord Have Mercy ” and also “ Isale Gan Gan“, but we carefully selected just the 3 above for your listening pleasure and also, to give kudos to a veteran [ hope he’s still out there ooo]. Listen up and share your thoughts.