NO! Cultists Take Blood Revenge After The Death Of Cult Leader; Allegedly Kill Over 3 Persons (Photos) 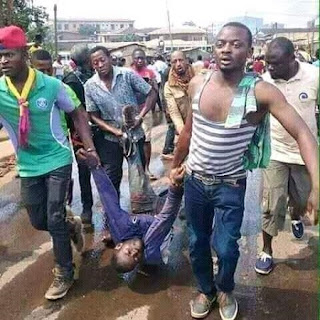 There is palpable fear in Ogbunabali area of Port Harcourt, the Rivers State capital, as suspected cultists have allegedly killed more than three persons. The slain persons, according to sources, were killed in different locations within the area. It was gathered that the killings started three months ago when one of the cult leaders in the area was murdered, which triggered a reprisal that led to further killings.


One of the deceased simply identified as Sammy was shot dead at a drinking joint in the area last week. Jerry, a student of Computer Science at the Ken Saro-Wiwa Polytechnic, Bori, was also killed by the suspected cultists. Residents, however, accused the police of being slow in arresting the criminals perpetrating the crime and restoring peace and order in the community.