REVEALED!! 6 Filthy Things Yahoo Boys Do To Blow Overnight. No.1 Will SHOCK You

Recently, Nigerians’ attention once again shone on the activities of internet fraudsters, known as ‘Yahoo Boys’ following the EFCC arrests around a popular Lagos nightclub.

While the legend of these scammers is not new the Nigerian society, the brazen nature with which Yahoo Boys splurge their ill-gotten wealth has become a spectacle of sorts, and media personality /businessman Noble Igwe remarked, most of the glamorous individuals in the posh Lekki/Victoria Island neighbourhoods are in fact, scammers. Many of these highflyers hide under the guise of being socialites who work hard and play harder- going by the logic of singer 9ice, who was once accused of glorifying and praising scammers in his music.

Worse still is the lengths to which these individuals reportedly go to acquire their fortune. In the last decade, media reports have told of desperate people who sell body parts (of themselves and unfortunate associates) to fund their lifestyles. Beyond that, some have taken to diabolical means to become rich, practically overnight- just to maintain their facade of being a ‘Lagos big boy’ who spends millions at nightclubs and hospitality centres.

The advent of social media has also exposed these people as they cannot resist showing off on Instagram and Snapchat. New reports show that many of these Yahoo Boys, like the cliche plots of Nollywood movies, often resort to human sacrifice in order to make the money rain. Truth, they say, is stranger than fiction.

According to our findings, here are some of the shocking, diabolical things Yahoo Boys do to concoct their wealth.

A young woman once sought advice online because she noticed that her boyfriend had a horrible mouth odour. She later overheard a conversation between her boyfriend and his friend where they discussed the bread he ate with faeces in form of a sandwich. He bitterly complained about his experience while eating the bread and faeces which was believed to have been given to him by his native doctor as one of the necessary things needed to be done to become a millionaire.

05. Bathing in a public space

Just when we thought we had seen it all, a man was pictured having his bath on the main road, ostensibly in order to make money. Investigations by NET  revealed that Lekki and Ikoyi environs in Lagos are highly populated by native doctors who have been brought in by their ‘clients’. These clients are Yahoo Boys that require their spiritualists to be closeby in case their services are needed.

Apart from sexual deviants who gain pleasure through sexual acts, there are also reports of Yahoo Boys who are mandated to have sex with dogs as a money ritual. Consequently, some of them bark at certain times of the month, no matter wherever they may be. Some believe that these barking sessions are a trade-off for the wealth they receive from ‘spirits’.

Another social media user raised alarm when she revealed that a new boyfriend of hers wiped her vagina with a piece of white cloth after they had sex. According to her, she soon started losing blood- leading her to believe that she had been used as a sacrifice for the man’s money ritual.

02. Licking honey to ‘command their customers

If ever there were a lesser evil, this would be it. There are reports of Yahoo Boys who procure ‘magic honey’ from their respective herbalists. The concoction is said to contain hexes and spells that compel their victims to give them whatever they ask for. Needless to say, several individuals have used this mean to demands millions of dollars from their hapless targets.

While mental illness is nothing to sneer at, there have been reports of certain individuals who go mad on random days, according to the type of ritual they have overtaken. As their spiritualists do not tell them before hand what day it will happen, they have no control over the time and place where they will be struck by madness for one full day. Earlier this year, a viral video showed an Abuja based man who ran out of his car in the middle of the road. After being chased by concerned onlookers, he was said to have regained his senses after which he got back into his vehicle and drove off. 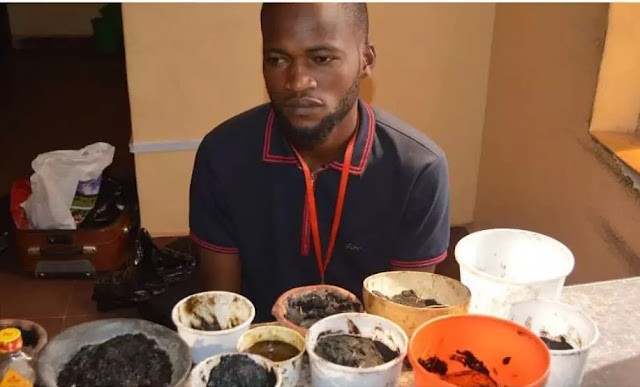