Menu
Home » Money Rituals » REVEALED:- All You Need To Know About Money R!tuals And Type's

REVEALED:- All You Need To Know About Money R!tuals And Type's

A+ A-
Print Email
ALL YOU NEED TO KNOW!! Types of money rituals in Nigeria 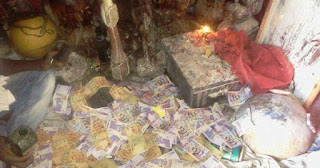 We all know that witchcraft (and sometimes even black magic) are popular in Nigerian tradition. One of the reasons why people get into the occult is, of course, to become richer, thus, there are lots of different money rituals that are supposed to bring riches to those who perform them.

In Nigeria, as well as in other parts of Africa, most rituals are divided into sacred and non-sacred. Sacred ones can be negative or positive; they involve sacrifices, rituals of initiation, and death rites. The positive sacred rituals are meant to consecrate and renew a religious object. Non-sacred rituals, on the other hand, signify re-enactment; they are merely an imitation. By another classification, the money rituals can be divided into three broad categories:


The first category involves human sacrifice. This can mean anything, from using a human skull of a person who has been long dead to actually killing someone and using their body parts for a ritual.

The second category revolves around smaller animal sacrifices. It is said that the rituals from this category are not quite as potent as the ones from the first, but at least they do not involve any activities that might send you in jail for life.


The third category includes all sorts of charms that can bring wealth upon the ones who performs them. They mostly involve chanting certain phrases or ‘charging up’ coins to return upon spending.

It is easy to guess that the first category is highly illegal, and most people rightfully consider it too appalling to be performed in the 21st century. Nevertheless, it is the one most often shown in Yoruba movies. At the same time, Nigeria experiences a lot of ritualistic killings to this day, so maybe human sacrifice as a part of blood money rituals is not yet a thing of the past, as you might expect.

The rituals from the second category that are often called Osole require the use of animals, animal parts and plants in order to work. That said, when things are not working the way they expected, people who practice Osole go for human sacrifice as well.

The third category seems like the most harmless one. The charms can be used to maximise one’s sales, charge money for return to the spender and just generally improve the caster’s financial situation.

However, as they usually do not involve sacrifices, they are considered to be less potent, thus often disregarded entirely. But why do people resort to performing money rituals? Let’s talk about it.

Why do people choose to do money rituals?


While it is obvious that people go for money rituals to get richer, it might not be exactly clear what pushes them to do this. Why not just earn money in more conventional ways, like by actually working? Well, most of the time money rituals are the last resort for some people. They might already be employed, but what they earn cannot possibly cover the cost of living. That is why getting into dark things might not seem that unreasonable.

At the same time, there are claims that some people who are already quite rich want to get even richer by performing money rituals. Now, why would people willingly put what they already have at risk just for a chance of getting richer is beyond us. Getting into money rituals can also make a person feel more powerful, so some do not even do it for the money but for the sheer feeling of immense power.

There are also people who manage to turn money rituals into a full-fledged career by offering ritual services to others. Most of the time such people are charlatans that get richer by fooling gullible people out of their money. Usually, people that get conned by these so-called ritualists do not turn to police for fear of ridicule, so these con artists roam freely with no repercussions and only get richer, as there is no shortage of dumb people in the world. If you want to learn how to do money ritual yourself, we strongly advise you not to get into it. First of all, if you are going for the big ritual (involving some sort of a human sacrifice), it is illegal.

Second, even if you are using animals or plants in order to perform your money rituals, most of such rituals (if not all) have serious repercussions. That way, you might end up with more problems than you started out with. It seems like the safest option to go for is the spells and charms, but most people say that they are the weakest option of all. Therefore, if you want to get more money, just get a proper job, honestly. Getting into the occult is not likely to do you much good anyway.