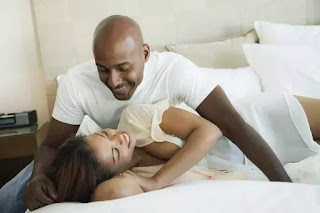 
Intercourse period are sensitive period. However,some men are very self-conscious before and even when having s*x especially when it is the first time. Here are top 10 things they are most jittery about

The reason we tend to bury our face in the nape of your neck when we orgasm is because at that moment in time, our face looks like we bit into a lemon while our penis has a seizure. It is something no one needs to see.

It doesn’t always smell bad in the moment, but then afterward, it’s like, “Oh, wait. That’s the smell of my wet ass. That’s what my damp butt smells like.” If you walk into a man’s bedroom, and you see a candle, it’s because that man’s sweaty butt smells weird. It’s the only reason that candle is there.

3. That he hasn’t been to the gym in a few weeks

But honestly, we just sit on our phones and play Clash of Clans next to the squat rack anyway, so it doesn’t matter.

4. That he just burped but he played it off by casually

mentioning that the house was on fire and you needed to leave. If we’ve got gas during s*x, going for the “house on fire” play is really only option we have. If we really like you, we have to actually burn our house down, which, like, sucks.

5. That he’s trying really, really hard not to come too soon

We’re doing this for easily 50 percent of the time we’re having sex. Hell, I’m trying not to come right now as I write this and nothing is even happening.

6. That he struggled undoing your bra

I don’t care how many bras we’ve undone in our life, some bras are just difficult. It’s even worse if we get cocky and go for the one hand no-look, only to fumble terribly and then ask you to just turn around after 30 seconds of messing with it.

Hopefully, you pretty much just maneuver around them, but if not we pray you don’t get a good look. I don’t want to body-shame anyone, but I think the general consensus is that everyone thinks balls look weird. It’s one of the few things that unify mankind. No matter whose balls they are, they look like the eggs from Aliens.

even if it’s a small part, thinks that maybe deep down this is some kind of scam. Why else would you be sleeping with us on purpose? Seriously, in what dimension are we perceived as a sexually viable candidate? I can’t speak for every guy out there, but personally, I’m always a bit incredulous when I sleep with someone for the first time. Like, maybe I’m just being distracted while five men carry all the furniture out of my apartment and off into the night.

9. That he has a bunch of garbage under the bed

Because the second we realized you were coming over, we basically just shoved everything under there.

Image result for Black couples romancing
10. That he has a bunch of garbage on the bed. We forgot some stuff,

so that impressive sex move we did where we spun you around and then supported your body with only our pelvis? That was only so we could hide a bunch of random crap under the covers.
By ADMIN
Tags Romance