SHOCKING!! Pastor Orders Female Congregants To Come To Church Without Underwear For Christ To Enter Their Lives

A Kenyan pastor, Reverend Njohi of theLord’s Propeller Redemption Church in Dandora Phase 2, an eastern suburb in Nairobi, has ordered all his female congregants to attend church services without panties and bras for Christ to enter their lives.

The law banning females from wearing undies was passed during a meeting chaired by the the reverend himself and according to him, underwear were ungodly.

Mothers were also advised to check that their daughters had complied with the new law when coming to church on Sundays so as to receive Christ too.

Rev. Njohi said there would be dire consequences for anyone who secretly puts on undies to to church. According to him, when going to church, people need to be free in body and spirit to receive Christ.

A member of the church who pleaded for anonymity said women followed the pastor’s orders as they came to church dressed without panties and bras. 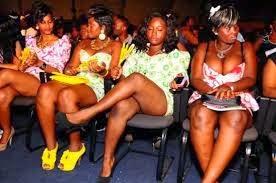