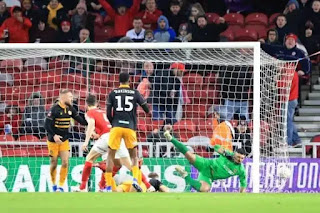 Super Eagles midfielder, John Mikel Obi made his debut for English Championship side, Middlesbrough, in their FA Cup fourth-round tie against Newport County on Saturday.

Mikel, who recently signed for the club after quitting the Chinese Super League, played for 62 minutes before being substituted.


A 51st-minute goal by Daniel Ayala put Boro ahead, but an injury-time equalizer by Dolan has delayed their advancement to the round of 16 of the competition.

Elsewhere, Super Eagles forward, Isaac Success sealed victory for side Watford with a 90th-minute goal in their 2-0 win at Newcastle.


The visitors got into the lead in the hour mark by a Gray goal, before Domingos Quina sent in a cross that was converted by Success.

At Brighton, Nigeria defender, Leon Balogun was not a part of the matchday squad as they were held to a goalless draw by visiting West Brom.