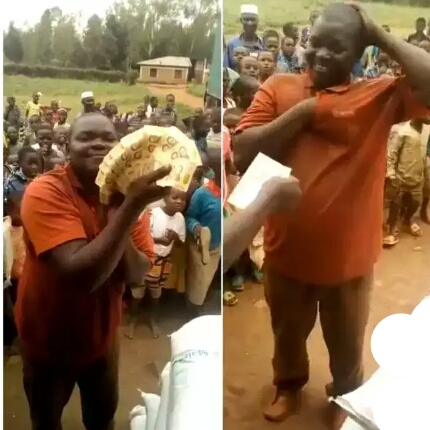 Current Video and Photo of Extremely Poor Magician who can turn any paper in the world to money within some minute. The boy who source opened up to be Rwandan was spotting performing his magic stunt in the open.  Now, the main question is, what makes him still  poor when he can do such a powerful thing.


I guess, he isn’t the only powerful magician around, Meet Adetunji Adediran, a.k.a. Zakurajah The Great, is a professional magician. The Communication and Language Art graduate of the University of Ibadan, who also doubles as a journalist, currently works as the Ondo State Bureau Chief for the News Agency of Nigeria (NAN).

His interest in magic dates back into the early 80s, when, as a young school boy, he had the opportunity of watching the late Professor Peller on the stage.  Zakurajah, who is a devout muslim, maintains that magic is and has always been a performing art. He makes a distinction between mystical and entertainment magic. According to him, while people with mystical powers invoke the supernatural, entertainment magicians rely solely on their wit and dexterity to put smiles on the faces of people by creating illusions in their

By the time Zakurajah was going for his mandatory one year Youth Service in 1992, his ability to entertain as a magician had so developed that he easily became the most popular corps member in Anambra State within one week on camp. He was able to achieve this feat by performing magic to entertain various interest groups and individuals on camp, including the camp commandant.

Since then, Zakurajah has gathered quite a bag of tricks and has been entertaining various audience with his magic tricks across Nigeria in the last two decades. In the last two editions of the Abuja International Film Festival that was held at the prestigeous Silver Bird Cinema, Zakurajah was the sole entertainer that added colour to the events.


Zakurajah is looking for a smart promoter who could exploit my skill and dexterity in the art of magic his or her advantage. Recently Passerby’s on the streets of ikeja were baffled and surprised by a Nigerian magician who appeared to be defying gravity by sitting suspended in the air with no visible sign of support