Am Happy To Pick Up Chelsea Job - Zidane 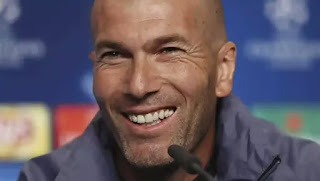 Zinedine Zidane is still keen on the Chelsea FC job, according to reports

Zinedine Zidane is still keen to take over as Chelsea FC’s new manager despite the west London club’s transfer ban, according to reports in the British media.
The Sun is reporting that Zidane is still “more than happy” to take over at Stamford Bridge, despite the Blues having been hit with a two-window transfer suspension by Fifa for the illegal recruitment of 29 young players.

According to the same report, the former Real Madrid boss is keen to take over at Chelsea FC and could be given as much as £200m to spend on new signings this summer.


The same article says that Chelsea FC are set to appeal the transfer ban and could be allowed to make signings this summer before the suspension kicks in.

The story also cites Mauro Icardi, Isco, Alex Telles and Kalidou Koulibaly as potential summer targets for the west London side if they are allowed to make signings.


Meanwhile, Chelsea FC are currently preparing for their League Cup final showdown with Manchester City at Wembley on Sunday afternoon.

The Blues are looking to gain revenge for their 6-0 thrashing at the hands of the Citizens in the Premier League at The Etihad earlier this month.