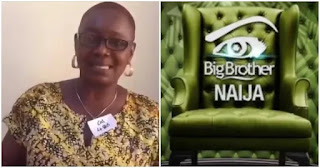 This woman who identified herself as Mercy Okadi Enoh, noted that she is farmer. She said she does, poultry, fishery and livestock farming.

The video, which has gone viral, showed the woman expressing her desire to be part of the people chosen to be housemates. It could be seen that she was at the auditions, from the tag on her top, that said number 486.

Image result for bbnaija 2019 audition
According to her, she would like to make a difference by becoming the mama in the house. She noted that she realised that there have been no mamas in the house from the past shows she watched.

Enoh believes that she can make a difference in the house by cooking African delicacies in the house, telling stories and teaching people about farming.


It just seems like everyone in the country wants to be part of the 2019 edition of Big Brother Naija.

It was reported that every audition center was already filled with crowd before the auditions started, majority of Enugu aspirants even got there around 6:30am.