BURSTED: 5 Unilag Students Arrested In Rape Of Minor [ Must Read 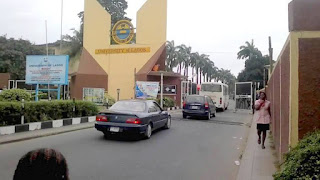 An Ikeja Domestic Violence and Sexual Offences Court on Tuesday remanded five students of the University of Lagos (Unilag) for allegedly defiling a minor.
The News Agency of Nigeria (NAN) reports that the students are- Moboluwaji Omowole, 19, Chuka Chukwu, 19, Peace Nwankama, 19, James Aguedu, 20 and Osemeka Josephine, 20.
They plead not guilty to a three-count charge of defilement of a child, permitting the defilement of a child in a premises and procuration.
The lead state prosecutor, Mrs. K.A Momoh-Ayokambi, said the defendants alongside others who are at large, committed the offence in January 2017 at the premises of Unilag, Akoka, Yaba, Lagos.
“Omowole and another individual who is now at large defiled the complainant (name withheld).
“Chukwu, at his premises located at No. 25, Shobande St., Akoka, Yaba, Lagos knowingly allowed Omowole and the other individual who is still at large to defile the complainant.
“Nwankama, Aguedo and Osemeka between January 2017 to March 2017 were into procuration of underage girls for the purpose of defilement,” Momoh-Ayokambi said.
According to her, the offence contravened the provisions of sections 137, 138 and 140(1)(a) of the Criminal Law of Lagos 2015.
NAN reports that the arraignment of the students which was to initially hold on Sep. 24, 2018 was stalled on two occasions, due to the absence of Daniel Ugochukwu, a unilag student who was to be charged alongside the others.
On Jan. 30, Mr. Chukwudi Nneke, the counsel to Ugochukwu told the court that the student was absent due to ill health and was receiving treatment in the eastern part of the country.
Mrs. Fehinti Igbemudia, the lead state prosecutor had disputed Nneke’s claims stating that the defendant was fleeing from justice as there was no proof of Ugochukwu’s ill health.
However, during Tuesday’s proceedings, Nneke presented before the court, a medical report dated Feb. 22 from the Imo State General Hospital as proof of Ugochukwu’s ill health.
Responding, Momoh-Ayokambi said “We were to request for a bench warrant for the third defendant (Ugochukwu) but on the face of the medical report, we have an amended charge dated Feb. 20 and we will like the defendants to take their plea.”
Following the plea of the defendants, Justice Sururat Soladoye, ordered that they be remanded in the Kirikiri Medium Prisons.
She adjourned the case until March 18 for hearing of the bail application
By ADMIN
Tags Exposed