Exposed: Evil Things Yahoo Boys Do To Get Rich - EFCC 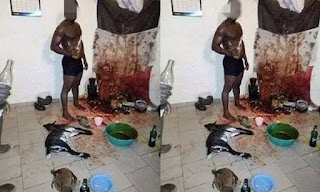 It has been reported that the Nigerian Police has recovered over 200 pants from yahoo boys arrested in Delta State, prompting us to take a look at the diabolic things these fraudsters do to become wealthy.

According to the report, the suspects were arrested by detectives attached to Okpanam Police Division in the community following credible intelligence.  The suspected ritualists were identified as Chuks Okolie, Francis Ogbereh, Collins Ederah, Felix Nnamdi, Goodluck John, and Steve Akpokona.

The security operatives also recovered the sum of N120,000 and other fetish materials from the suspects who had packaged the underwear into a sack.

The love for money is, according to the Bible, the root of all evil. This part of the scripture points to the extent Yahoo boys (internet fraudsters) go in order to defraud their victims and we have seen and heard so many odd stories about these guys.

Yahoo Yahoo (internet fraud) has become rampant among Nigerian youths and many of these fraudsters now engage in rituals for their illegitimate business to boom. Yahoo boys who engage in rituals are called Yahoo plus – and these group of fraudsters can been seen in every nook and cranny of the country.


Yahoo plus eat faeces with bread in form of a sandwich. It was reported that a lady once overheard her ex-boyfriend in a conversation with a friend who listened to him narrate his experience while eating the mixture which is believed to be one of the rites he needed to fulfill in a quest for money.

3. Barking once in a month as part of money ritual:


They type of ritual some of them do requires them to bark like a dog. There is a video of a Yahoo boy who was barking like a dog while his friends watched and laughed at him.In the background, his friends cheered him up, saying “owo de” which means “Money has arrived”.

4. ‘Oshole’, the power of compulsion:


This is a type of ritual that empowers a Yahoo plus to command his victim, otherwise known as ‘client’, to do whatever he wants.

The ‘client’ cannot decline whatever he or she is asked to do, and these fraudsters use this type of ritual to defraud them of a lot of money.

5. Wiping a lady’s private part with towel after she has been slept with:


Yahoo plus also make use of females in the quest for money, by wiping moisture from a woman’s part after she has been slept with. The material is then used in a ritual. There is a lot that could happen to any lady who falls victim of this evil act by Yahoo plus.


Yahoo boys who engage in rituals for the purpose of making money could be told to bring forth his nephew for the ritual.

An image of one Tunde Owolabi, who was captured in handcuffs as he crouched beside the corpse of a little boy reportedly 7 years old, was shared by Odueko Olumide John. This is the extent Yahoo boys go in order to become wealthy.


The suspects were arrested for various offences bordering on cyber crimes and money laundering; and the raid was carried out following intelligence reports concerning their flamboyant lifestyle. During the operation, exotic cars and charms were recovered.


The EFCC zonal head for Lagos, Akanninyene Ezima, said: “It is to checkmate the activities of these undisciplined elements who want to reap where they did not sow. By this action, we are also sending a red alert to the so-called yahoo-yahoo boys that engaging in fraudulent deeds does not pay.”