Menu
Home » Exposed » EXPOSED:- I Have Slept With Over 900 Ladies Ghanaian Actor Confessed

EXPOSED:- I Have Slept With Over 900 Ladies Ghanaian Actor Confessed

A+ A-
Print Email
SHAME! Popular Actor Confesses On Live TV, Reveals The Over 900 Ladies He Has Slept With 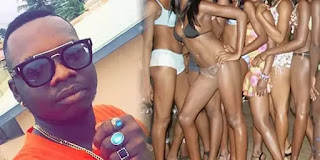 Ghanaian actor, Nana Tornado, the man who believes there is no power in the name of Jesus has shockingly revealed the number of women he has slept with in his entire life. The actor whose real name is Emil Gerald Wood made this shocking revelation when he appeared on ETV Ghana’s “In Bed With Adwen” show. His revelation came on the back of a text message sent by a viewer who bragged that he has slept with 120 women. Reacting to the viewer’s text message, Nana Tornado revealed: “I swear I have slept with 1.2billion. My body sweet me oo. The last time my friend and I calculated 5 months ago, it was more than 900 and something women. Tell him to speed up the game”.


This is the same actor that literally set social media on fire with a video of himself with Nigerian cross-dresser, Bobrisky known in real life as Okuneye Idris Olarenwaju. The two celebrities were captured in a video cruising in town and they stopped by to get some pizza at a restaurant. Nana Tornado was behind the wheel and was seen all bubbly mood as he enquired about the arrival time of their pizza. Bobrisky who announced his visit to Ghana via social was seen also in a joyous mood and flaunted his beauty in the video. Both stars were on the celebrity cook show which is hosted by award-winning actress, Yvonne Okoro known as “Dinning with Cooks and Braggarts”.

Image result for nana tornado
Some time back, Nana Tornado spoke on the allegations going round in the media in relation to his working relationship with Delay. The actor revealed that he did not receive any form of remuneration from the “Afia Schwarzenegger” originator. He went on to reveal that he did not need to depend on Delay to get into the limelight. He also indicated that he had started his own production which was going to be aired in Ghana soon. He dispelled any rumors that he was ‘into men’ and went on to reveal that he had a daughter of his own. He also added that he was related to Chief Justice Georgina Woode.