INEC: Inec Chairman Alarmed The Raid Of It's Officials By Security Agencies 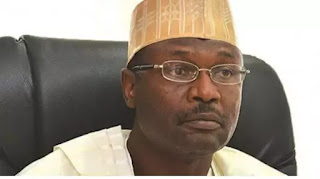 The Independent National Electoral Commission (INEC) has denied the report that one of its national commissioners was arrested by security operatives.

INEC Chairman, Prof. Mahmood Yakubu, faulted the claim on Tuesday during a briefing on measures put in place by INEC towards conducting credible elections after the polls were shifted.

“No Commissioner of the Commission was picked up by any security agency.

The INEC boss disclosed that the commissioner, whose name was being circulated in the social media was in his office at the time when he gave the briefing.

He also condemned the report that six directors were picked up by security operatives, stressing that nothing of such happened.

Prof. Yakubu further cautioned politicians against speaking in a manner that would overheat the polity and political atmosphere.

Earlier, he offered his regrets over the postponement of the elections and assured Nigerians that the electoral body under his leadership was working towards conducting credible elections.