JUST IN : Kukah , Abdusalami Meets With Atiku And Obi 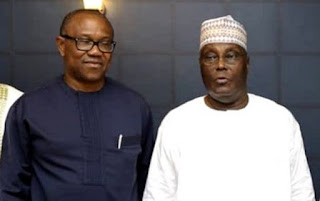 A former military Head of State, Gen. Abdusalami Aboubakar (retd.); the Catholic Bishop of Sokoto Diocese, Matthew Kukah, and other members of the National Peace Committee met with the Presidential candidate of the Peoples Democratic Party, Atiku Abubakar, in Abuja on Thursday night.

Others at the meeting included Cardinal John Onaiyekan and Rev. Fr Atta Barkindo of the NPC Secretariat.

The meeting, it was learnt, was convened following Atiku’s decision to go to court to challenge President Muhammadu Buhari’s victory.

The meeting, which, started around 6pm, lasted for about one and half hours.

A source, who was at the meeting, told one of our correspondents that the committee asked for the grievances of Atiku and his team over the outcome of the election, which was won by Buhari of the All Progressives Congress.

The PDP was also said to have told the Abdusalami panel that the party was in possession of documentary evidence to show that the election was characterised with irregularities that were too weighty to ignore.

The source said, “The committee came to meet with us and asked us how we felt about the outcome of the election. We explained our disappointment to the committee and they agreed with us on some of the issues we raised.

“The committee members pleaded with us to accept the outcome and probably forget the issue of going to court and all that.

“But we let them know the danger of ignoring such calamity as it would send dangerous signal to both the international community and future generations in the country.

“We have to lay a good example that we cannot build on nothing. It will be dangerous to forget the massive rigging and dangerous things that happened in many parts of the country.”

The leadership of the PDP is expected to address a press conference on the meeting on Friday (today).

The PDP team and Atiku, it was learnt, demanded that the military should not be  deployed in subsequent elections, while INEC should open back-end servers to all participating parties.

They also called for the release of all politicians allegedly detained illegally by the Federal Government and the unfreezing of accounts of those whose accounts were blocked as part of the government’s clampdown on the opposition.

They also demanded that accreditation must come before voting in the March 9 elections.

Meanwhile, it was gathered that the Abdusalami panel was on its way to meet with Vice-President Yemi Osinbajo as of the time of filing this report last night.

The meeting, it was learnt, was aimed at encouraging politicians to tone down the war of words between the APC and the PDP following the announcement of the result of the Presidential election.

While Atiku has rejected the result describing it as a sham, the APC, most especially its National Chairman, Adams Oshiomhole,  has been lambasting Atiku, describing him as a sore loser.

The peace committee, it was learnt, was asking both parties to abide by the spirit and the letter of the peace pact they signed before the elections.