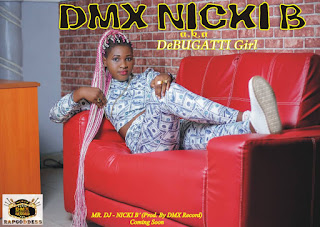 Born on September 18th, 2002, #NickeyBrown is a Nigerian Girl. She grew up in Olley Royal family Ugbokoda in Tebu, Warri North Local Government of Delta State. With a father who died when she was just 5years old and went to live with her aunt at Warri. She schooled at Ubeji Grammar School Warri and was tagged as the Most quiet and intelligent student of her time. #NickeyB" later came to Sapele to complete her SS3 WAECE at VICKIN's Private School located at Gana Road, Sapele, Delta State. She is into Singing,  a Very TALENTED MUSIC RAPPER like many other big stars. Her Music Role Models are Nicki Minaj,  Ciara, and Miss Elliot. #NickeyB"  began her singing career as a Gospel Music Artiste in September 1st, 2018 and she later switched to Circular Music October 1st, 2018

Her talent was first spotted by VOF Gospel ReCord and later taken by the DMX management at Twitter, Instagram and Facebook and later was recruited for The SEND DE MONEY💰  "The BITCH"  series. Her rapping skill caught the attention of SIMEON KING ENTERTAINMENTS,  FACE OF SAPELE,  PLENTYMOUTH 2CENSORS,  SOUTH SOUTH GROOVES, DJ FINEFACE,  DJ ERICKEN,  DJ EDO,  and many others who later on tagged her for a number of collaborations on their SHOWS and in their mixtapes.

In December 10th, Nickey appeared on the first mixtape "ONE TICKET". A week later, she dropped another mixtape at DJ ERICKEN Lagos State and since October 1st, 2018,  #NickeyB"  had performed in over 150 SHOWS within and outside Delta State Nigeria and has two offered at Kenya which landed her as SAPELE NICKI MINAJ Female Best Rapper of the Year 2018.

In January 1st, 2019, #NickeyB" announced that she would be releasing a new TRACK "WYNE IT"

#NickeyB" has meant with many Top  Personals  for a MASSIVE MIX TAPE PROMOS of her two HIT TrACKS title MR. DJ and WYNE IT.

#NickeyB" presently is studying Productions and Mixing in her Studio.  Thanks to her Director and her FANS