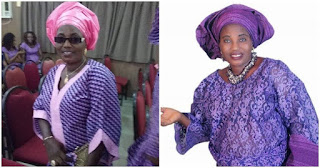 Adebisi expressed sadness over the death of the actress' death, stating that she would be missed by all.

According to Adebisi, the woman was very good, prayerful and friendly. Adebisi also prayed that God forgive her of all her shortcomings.

The post read: "I never thought I'd ever use these pictures to say RIP to you ma but who am I to question you, God?. Mother like you is scarce. A very good, prayerful, and friendly mother to all. We (Ogunsola Isho Pepper) are all going to miss you Grandma Ogunsola Funmilayo Iya Ijewuru. May God forgive you of all your shortcomings and grant you eternal rest. Rest on the Bossom of our Lord Christ till we meet and part no more."

This is so sad! Nollywood has lost so many talents in the industry to the cold hands of death, and all of them would be missed and remembered in the hearts of fans.
By ADMIN
Tags NollyWood