REVEALED:- Which Of These Nigeria Artist Will Still Be In Existence In The Entertainment Scene ?? 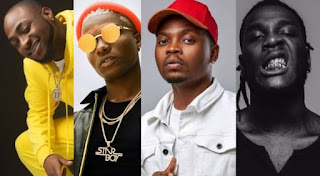 Every Nigerian has worries about the future. What does it look like, how is it going to look like, will I still be in charge, kicking it five years from now? It’s the same thing with our artistes too.

Overseas, the music industry is structured, an artiste like Jay Z had been kicking it since the 90s with the likes of Nas and The Game and till now, they are still in charge.

However, can the same be said for our artistes? IsD’banj still at the top of the game even after the whole Mo Hits fame?

So we examine the following four artistes, will they still be relevant ten years from now?

Many call him Africa’s greatest. The Starboy. Alpha male. Leader of the Next Generation. Pace Setter.

But let’s be frank here, WizKid has this same Afro beat sound for like two years now, don’t you think fans will later be tired of him using that sound repeatedly? Won’t this lead to his extinction?

Davido lacks that talent but in the absence of that talent, he makes it up with being a king in the music business.

He knows the art of the business and knows what to do to make up for it.

But eventually, won’t people go for quality at the end of the day. It’s the future we’re taking about here.

New sound guy. Everyone loves him and adore him for giving them the biggest song of 2018.

Won’t Nigerians do this to Burna Boy? Won’t we eventually fall out of love with him?

The new school guy, gives young artistes the chance to rule. Then after, he goes for quantity, going on a song offering spree, distributing records around.

But only one Motigbana song will be a hit out of like ten songs released? Isn’t that disappointing and a waste of time? It obviously means Nigerians choose quality over quantity.
By ADMIN
Tags Entertainment