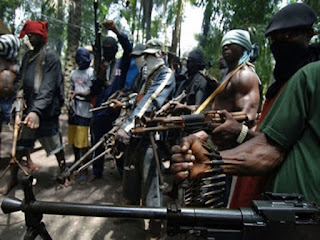 2019 A War Is Brewing! Yoruba’s Hausa’s Protect Yourselves, The War Is Coming


The saga with the chief justice of Nigeria is definitely getting out of hand. The Chief Justice has awakened a new course  the federal govt  has stepped  on a sleeping lion and that is the Niger delta Militants.

They also went ahead to call on all the northerners and Yoruba’s who had oil well to make sure they vacate with  immediate effect or else face wit the consequences of ignoring their threats.

The Niger Deltans have vowed on Sunday not to hold back in attacking the oil wells in that part of the country, this of course is as a result of the decision of the federal govt to put the chief justice on trial, the group have claimed that they will be having none of it and the federal has to stop its proceeds or a war like never before will be unleashed in Nigeria.This vow was made on Sunday. The chief justice of Nigeria is to be brought before the bench on Monday  and the arraignment is to take place before the code of conduct tribunal over the crime of non deceleration of asset.

The group of militants have declared that they were extremely shocked with the development and insisted vehemently that onnoghen trial was simply brought forward that he was Niger Deltan and the trial was more of a persecution rather than a formal trial conducted under a democratic govt. The militants have boldly proclaimed that they would not stand for it and have insisted that under no circumstance would Onnoghen undergo the trial.

The militants have further brought to light the fact Onnoghen  petition was simply the crafty handiwork of President Mohammed Buhari, and the reason for this was to push him out as the chief justice in Nigeria and replace him with a northerner so as to make the way smooth for him in the election that will be taking place next month. This statement put forth by the group was signed by  John Duku who belongs to the  Niger Delta Watchdogs and Convener,


the other agitators include   Benjamin from the  Bakassi Strike Force Osarolor Nedam from Niger Delta Warriors, Henry Okon Etete  from Niger Delta Peoples Fighters and Asukwo Henshaw  from Bakassi Freedom Fighters. According to the quote it was stated that the appointment of the chief justice was confirmed by vice president Osinbajo, before the confirmation President Mohammed Buhari had refused to confirm his appointment, and it was during his sickness while the president was in Britain that he was finally confirmed into the position.

Image result for onnoghen pictures
“We wish to also recall that in August last year, Mr Matthew Seiyefa of Bayelsa State, who was the most senior and most qualified officer at the time was appointed to the position of acting Director-General of the Department of State Services by Prof. Osinbajo, only to be replaced with a retired and junior officer to Seiyefa, Mr Yusuf Bichi, by President Buhari as soon as he resumed duties.


They also went ahead to call on all the northerners and yoruba’s who had oil well to make sure they vacate with  immediate effect.

“We also want to warn our Niger Delta brothers, who are working for Buhari to watch their back and know that we are watching them and their family members. We warn them to stop campaigning for Buhari in the Niger Delta,” the statement read.

Image result for onnoghen pictures
The Chief Justice of Nigeria is known to be  head of the judicial  arm of the federal republic of Nigeria the head of the judicial arm of the Federal government of Nigeria, and is the absolute head  over the country’s  National Judicial Council the Supreme Court of Nigeria. Walter Samuel Nkanu Onnoghen  who is the present chief justice of Nigeria was appointed by the vice  President Osinbajo  on acting capacity after the retirement of Mahmud Mohammed who attained the prescribed retirement age.


Supreme Court in  Nigeria is very much known to be  the highest court superseding all others in Nigeria, its decision is always final.  Under the law the chief justice  is always  and will be nominated by the president of the federal republic of Nigeria under the recommendation of the judicial council. According nto the law the chief justice position is strongly sealed under the constitution of Nigeria and can only be removed  at death, impeachement under valid grounds by the senate, or  when he attain the age of 70.

Please leave your comments below and do not forget to share.