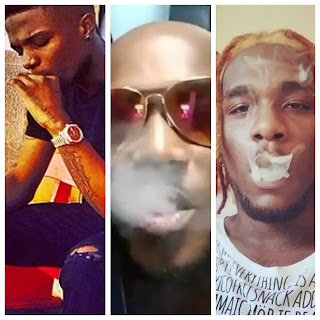 On stage these guys are adored and loved. Crowd applauses them, and all the fans are thrilled by their performances. But have you ever wondered what really gives them that drive and energy?


According to what we heard from a close source, Paul & Peter are worthy to be in this list. Though the duo have never been seen smoking it in public, but we heard they always smoke weed before recording any song and it’s a habit they’ve decided to keep secret from their fans.


9ice is a very talented singer, musician and songwriter. But he is said to be a heavy smoker. Even his first album has several songs with the texts about marijuana and some other bad habits. Moreover, he is allegedly a heavy drinker.

Popular Nigerian producer is another fan of weed in our list. There were a lot of stories where he was mentioned to have fun with alcohol and drugs. There is even a video of D’banj and Don Jazzy caught smoking.

We believe that all the young fans of these stars understand that there is no need to start all these bad habits just because you love their music.

William Orioha aka 2Shotz, who met his wife on Twitter is known for his expressive behavior. He is told to be smoking and drinking when he is in Lagos for his shows.

Related image
The rap star has once confessed about his habit:

But he has been trying to quit for several years:

“When it comes to drugs, I can say I drink Panadol sometimes when I have headache. Or I can take Vitamin C. Marijuana? Yes, I have tried it before. I tried it and I felt ire (high).”


This big star is not keeping his bad habits in secret  also. Some of his friends describe him as heavy smoker and drinker.

Wande-Coal-dread
Wande Coal is another Popular Nigerian singer who love smoking weed too. What else do you expect from a Mushin born nigga?? According to a close source, Wande always smokes before recording any song and hitting any stage to performing meaning, weed inspires him a lot.

Wizkid
Baba Nla!!! Extremely talented young rap artist has been caught several times at Elegushi Beach smoking with friends. He also shares some pictures on his social media from time to timewhere he might be smoking.

Image result for Jesse Jagz smoking
Jagz is the greatest and he’s not only the greatest in terms of rap but when it comes to getting stoned with Jesse Jagz I wonder how far can you go..

Hehehe! Burna Boy is not just a stage name, of course it tells you everything about him. The Dancehall singer can never go a day without his weed I think this is the major source of his inspiration. When it comes to getting stoned, Burna Boy is god the father, the son and holy smoke…LOL