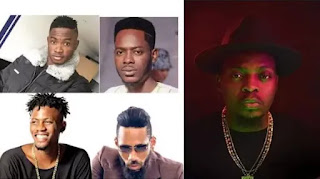 12 people Olamide helped to become rich & famous in Nigeria – No.11 is now bigger than him (Pictures)

MUST READ: WHY I LOVE WIZKID THAN DAVIDO
OLAMIDE EXPLAINS

12 people Olamide helped to become rich & famous in Nigeria – No.11 is now bigger than him (Pictures)
An adage says to whom much is given, much is expected. From 2010 when he released his debut single “Eni Duro” till this moment, Olamide Baddo has been enjoying undying love from the street. Apparently, it is safe to say that the street made him the Baddo that he is today. In an attempt to give back to the street, he has helped a whole lots of raw talents on the street to get much needed recognition in the music industry.Here is the list of artistes Olamide has helped their career;


After few weeks of dropping a rather unpopular single titled “LOW”, Olamide lighted up his career by helping him cook up a street certified anthem “ILLEGAL” which is the reason many people can relate with the brand Pepenazi up till today.


He was just a street boy doing freestyles around secondary schools in Lagos before he got an encounter with Baddo with the help of his friend Viktoh. Olamide signed him up to YBNL and now Lilkesh has grown so big enough to float his own record label “YAGI” after expiration of a successful record deal with YBNL.


He got his big break into the music industry after a jamming collaboration with Olamide Baddo on the song “Woss wobi”. The song successfully went viral because of the presence of Baddo on it which makes it easy for fans to fall in love with the unique style of “CDQ Yeeye”.


The year 2015 was the year Adekunle Gold started living the life of a star after Olamide Baddo got him signed up to YBNL as the only singer on the label. Today, the Sade crooner can only thank God and Olamide for what he has achieved so far in the industry.


The Tinny Entertainment act, YCee came into limelight by dropping a very big hit track tittled “Jagaban”. Despite this hit single, YCee was still finding it hard to sustain his newly found street love. Four months later when he remixed the song with Baddo, it becomes crystal clear to everyone that YCEE has come to stay.


In case you don’t know, Eniola Olamilekan Adedeji widely known as DJ Enimoney is the younger brother of the YBNL Boss Olamide Baddo. As the number one YBNL Disc Jokey, the massive influence of his Big Brother, Olamide on his career cannot be under-estimated.


Peeshaun and Vavavoom popularly known as Skuki are two brothers joined together by blood and music. Their relationship with Baddo on tracks like Peteru, Over the mountain in 2014 and 2015 respectively has left a huge imprint on their music career.


Despite being widely criticized as Olamide’s worst signing, Viktoh has enjoyed much recognition in the music industry as a YBNL act before the expiration of his contract with the label.


Chinko Ekun is one of the almost dying talents revived by Olamide. The hardcore yoruba rapper caught the interest of Baddo who wasted no time in signing him on to YBNL. He just got a record deal with a Dubai-based record label, Dek-Niyor Entertainment. Looking back at the start of Chinko’s career, it is safe to conclude that Olamide has indeed given him the voice of the street that he is enjoying today.


This guy is another young talented rapper who just got a massive break into the music industry courtesy Olamide Baddo. Olamide has shown him road to fame in just few weeks of getting signed on to YBNL.

Aside dropping his debut single, festival bar, Davolee also featured in Pepper Dem Gang, a track off Olamide’s “The Glory album”. His appearance on the Album is a height many young artistes would love to attain in their career.

Tracks like Ghost Mode, Dope money and many other hit collabos that Phyno had with Olamide at the early stage of his career made him a Big Star that he is today.


Temmie was a rather unknown singer uploading freestyles on Instagram before she caught the attention of the YBNL boss. The wind of fame blew her into limelight the moment she was introduced as YBNL princess by Olamide in April 2016.

Elevating others while you’re elevating yourself is obviously the strategy Olamide is using to build an Empire for himself in Nigerian Music Industry.