Menu
Home » Celebrity Gist » Lost But Not Forgotten [ Must Read

Lost But Not Forgotten [ Must Read 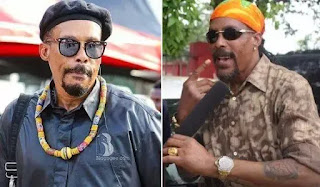 For many families who followed the Nigerian movie industry way back from 1990-2008 or thereabout, there were a number of actors that gave astounding performances that etched their names in the memory of many.

One of such screen heroes is talented actor Hanks Anuku, who was well known for his adrenaline boosting roles in action themed movies.

A social media user recently took to popular micro blogging platform, Twitter, to run a poll in which he had attempted to find out the baddest Nollywood actor. In his options, he listed Hanks Anuku, Gentle Jack and Segun Arinze.

1,158
6:00 PM - Mar 3, 2019
951 people are talking about this
Twitter Ads info and privacy
Responses to the tweet resulted in more than 3,000 people talking about the actor and making him jump on the trending topics on Nigeria Twitter.

Hanks Anuku will fuxx sh!t up anywhere and leave.


His facial expressions gave us chills.

Image result for Hanks Anuku
When he gives this look, just go and start hiding your family members.

Who else gathered at their neighbours window just to get a glimpse of the ‘Old Nollywood’?


…and we mean the above image kind of Nollywood movie.

Image result for Black Man crying tears of joy gif
Where did the time go?

Fun Fact: Do not leave your property with Hanks!

I need Hanks’ type of courage. No, i mean it.


Wow! What a Legend!

This is in the Nigerian constitution… Hashtag WeAllKnowHasnkIsCrazy.


There is no debating this.

The video below will forever resonate!


Hanks must be protected at all cost.

Hanks sure gave us the chills with the whole bad boy look….


Even when he’s not acting.

Image result for Hanks Anuku
Imagine with this look pull on you.

Often times, we lose the greats to unfortunate circumstances. #PrayForHanks!


…And whatever you do, NEVER forget the Legend that is Hanks!

Image result for Hanks Anuku
What are your thoughts?