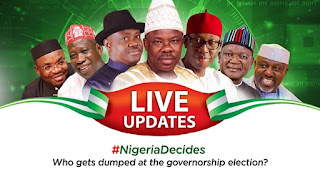 However, Rivers, Adamawa and Bauchi States are still undecided.

INEC, however, concluded election in Plateau, Benue, Sokoto and Kano on Saturday.
DAILY POST has compiled list of governors elected so far from the March 9 and March 23 governorship election.

States that were not affected by the 2019 governorship election include: