Reasons Why I will Continue To Criticise Buhari - Obasanjo 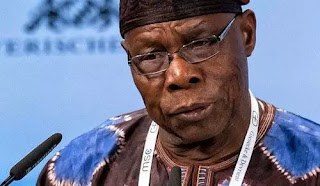 Former President Olusegun Obasanjo on Tuesday said he would continue to criticise President Muhammadu Buhari until he improves his style of governance.

He also said he is qualified to criticise any government policy and leader found wanting in the discharge of his or her duties.

Mr Obasanjo stated this while speaking at his 82nd birthday lecture held in Abeokuta.

He said this shortly after the Alake of Egbaland, Adedotun Gbadebo, urged him to stop criticising Mr Buhari.

Mr Obasanjo has been an unrelenting critic of Mr Buhari and opposed his reelection bid. He had thrown his support behind Atiku Abubakar, the presidential candidate of the Peoples Democratic Party, his erstwhile deputy.

Mr Buhari has since won reelection.

The Alake of Egbaland had told Mr Obasanjo at the event to sheathe his sword.

”You all know that I was an officer under General Buhari, so each time Obasanjo criticises my boss, I always stand to say, my senior (OBJ), please leave the president alone! At 82, Baba is still fighting on, please fight less and be a consultant to everybody,” he said.

Unimpressed
An unimpressed Mr Obasanjo responded to the ‘advice’.

He explained that he has nothing personal against Mr Buhari, adding that ”in democracy there is always room to criticise a policy, government or a leader if (they are) not doing well”.

”In a democracy, you criticise a policy, a government or a leader. Democracy is not a family affair, even if it’s my brother that is there, and he is not doing what I believe he should do, he must be criticised that is what democracy is all about, criticism,” he said.

The former president said, he remained the ”only longest serving Nigerian leader” and as such ”has seen it all”.

”So when I say something, I know what I am saying. So if I say anybody in government in Nigeria is not doing well, let that government prove that it is doing well.

”It’s not anything personal, so Kabiesi (king), your boss Buhari, there is nothing personal between him and me. Just as you say, he is your boss. I am his boss with all due respect. Now the point is that I have been in that position longer than any Nigerian will ever be there.

”‘So when I say something, I know what I am saying. Kabiesi, any time you say, leave my boss alone, I say he is your boss, but I am also his boss so you can also ask your boss to leave his boss alone and do the right thing,” Mr Obasanjo said.

Plaudits for Obasanjo
Meanwhile, the guest lecturer, president of the Inkatha Freedom Party of South Africa, Mangosuthu Buthelezi, earlier said African leaders have a lot to learn from the leadership style and wealth of experience of Mr Obasanjo.

Mr Buthelezi, who delivered a lecture titled ‘Colonialism, Apathied, Freedom and South Africa Rising”’ said Mr Obasanjo has a distinguished heritage ”worthy of emulation by those in positions of authority”.

He said Mr Obasanjo’s legacy would outlive him, adding that development and growth will flourish if leaders ”displayed determination, and give a continuous hope and insightful governance”.