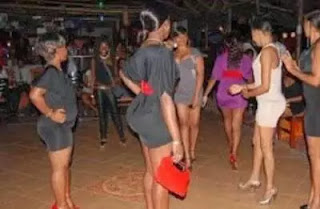 
Prostitution is illegal in Thailand, however, in practice it is tolerated and partly regulated.


Prostitution is also legal here in Germany. It’s little wonder when you consider that organized prostitution in the country dates back to the 1200’s AD.


Prostitution is huge in Malaysia. The United States has put Malaysia on the blacklist of countries with the worst cases of human trafficking and human rights abuse, including child prostitution.


Prostitution is legal in Brazil, however, it is illegal to run a prostitution center or to employ prostitutes in any other way.


According to some of the well known researchers in China, there are about 10 million active prostitutes in China. In other words, these prostitutes actually contribute as much as five percent to the country’s annual GDP (although the earnings are not taxed, it still goes back into the economy through consumption).


Every year, at least 50,000 girls travel from Nigeria (mostly from Benin City, one of the countryÕs poorest cities) to Europe. A trafficker, with the help of a voodoo, or juju, priest, managed to convince them that a decent job awaits them in the promised land. The journey is often nightmarish, crossing the Lybian Sahara on a truck, and trying to reach the coast of Italy or Spain on a precarious rubber boat. Many of the girls die of fatigue, of dehydration, or drown at sea before reaching their destination. Those who make it, soon realize that the promised job does not exist: after their papers are seized by the traffickers, they are sent on the street as prostitutes. Meanwhile, in Nigeria, the government and an Ngo run by nuns are fighting to set these 21st Century slaves free: from their masters, as well as from the naivete that makes them so vulnerable.


The Philippines offers female company in the form of “bargirls”. The girls here are usually required to wear their “bargirl” ID tags in well known places. On top of that, they are regularly tested for STDs.


In Peru, prostitution is legal for women over 18 years old and that’s only if they register with municipal authorities and carry a health certificate. However, child prostitution is still going on in this region (in fact, the number has doubled in the recent years).


Despite legal sanctions and police crackdowns, prostitution continues to flourish in South Korea, while sex workers continue to actively resist the state’s activity.


The economic condition in Venezuela is pretty bad and this is one of the reason that tripled the number of sex workers here.