[ Sports ] Boxer Ban For Kissing A Journalist [ Must Read 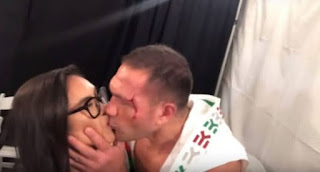 Bulgarian heavyweight Kubrat Pulev has been ordered to take sexual harassment prevention classes after kissing a female journalist, according to reports in the US.

The 38-year-old kissed Jennifer Ravalo when she was interviewing him after a fight in California in March.

California’s state athletic commissioner said she “would like this to be a teachable moment” for Pulev.

The LA Times reports Pulev, who was suspended in California after the incident, apologised to Ravalo during Tuesday’s hearing with the commission, and was told his suspension would be lifted if he paid a fine and attended the classes by 22 July.

But he was also warned he will face a lifetime suspension if he is involved in any future incidents.

CSAC commissioner Martha Shen-Urquidez said she wanted to offer Pulev the chance to reform “rather than take away a fighter's ability to make a living.”

Pulev has been linked with potential future fights against both Anthony Joshua and Tyson Fury.

He had been scheduled to face Joshua in 2017 but pulled out through injury. (BBC)