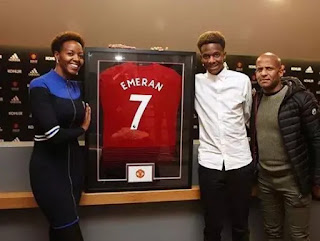 Manchester UNITED new boy Noam Emeran is being lined up as a star of the future after being presented with Alexis Sanchez's No7.

The 16-year-old finalised his switch in January amid interest from Juventus and Paris Saint-Germain.

Formally of Entente and Amiens, Emeran is expected to slot into the United academy with the ambition of making the first team.

He wrote on Instagram: "Happy and proud to announce my signature in this great club and big Family which is at Manchester United.


"A big thank you to my parents, to Badou my lawyer, my loved ones and the coaches (from Sannois, Amiens and INF) who have made me grow up to this day.

"This is the beginning of a new and great adventure if God wants it."

Emeran was United's only signing in the January transfer window and arrives with a big reputation in his homeland.

SEVEN-TH HEAVEN
Coaches in France are expecting big things of the winger who has been compared to Manchester City's Leroy Sane.

Upon moving to United he cited the Germany international, as well as Anthony Martial and Neymar as his main role models.

As the deal was completed, United provide a possible insight into how he is regarded at the club.

Emeran was given a framed shirt with his name above the iconic No7 - currently worn by miss-firing Chilean Sanchez, by a club official.

The shirt number has been associated with some of the club's greatest ever players, with George Best, David Beckham and Cristiano Ronaldo having all graced the jersey.

But Sanchez has divided opinion in Manchester due to his uncertain form which has seen him net just five goals in 13 months since joining from Arsenal.

Fans could not wait to use the gesture to highlight the 30-year-old's inept spell at United.

Andrew McDonagh stated: "Don’t even know who he is and I’d already start him over Sanchez."

James meanwhile joked: "Our best number 7 since Ronaldo. No debate."